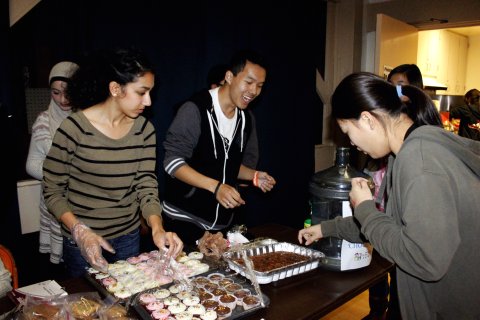 IRVINE- On February 10th, rock music blasted out of the Heritage Park Community Center during the Battle of The Bands joint charity event hosted by the High School Youth Action Team (YAT) and Key Club. The proceeds went towards the Children’s Hospital of Orange County (CHOC) and Pediatric Trauma Prevention (PTP).
Local bands were given exposure and a chance to record at Sonikwire Studios and perform at future Irvine events. Locally famous bands appeared at the event to win the coveted recording session. Such bands included: Breach the Summit, The Cherry Kids, Iconic Revelation, Holiday Time, PTFB, and Axcentro.

After each band’s performance, audience members were given the opportunity to vote for their favorite performance, boosting the chosen band’s odds of winning the prize. Axcentro front-man Sean Nguyen, a junior from Beckman High remarked, “We learned so much as a band, this being our debut performance.” Axcentro was one of the two top bands selected to advance to the future Battle of the Bands in June.

Volunteers from the YAT and Key Club were present at the event, selling tickets, snacks, and baked goods. “I loved serving and selling the baked goods because I was able to listen to listen to awesome music and volunteer at the same time,” said Key Club volunteer Nikki Aflatooni.

Audience members who were hungry after jamming out to the bands could buy a variety of baked goods such as cake pops, brownies, cookies, and cupcakes all while making a donation to CHOC and PTP. Other items for sale included Tilly’s sunglasses and lanyards. The minimum cost for both of the items was one cent and a part of the proceeds also went towards the cause.

All in all, the event surpassed expectations, raising money for commendable causes while feeding the masses who donated their money and time to make the successful fundraiser. Besides being a charity event, the Battle of the Bands was an opportunity to meet new people and develop a unique bond that otherwise wouldn’t have formed. Beckman freshman Annie Wang, one of the many people able to make new connections, adds, “This event was very fun and I hope that there are future ones just like it! Events like these bring the whole community together!”