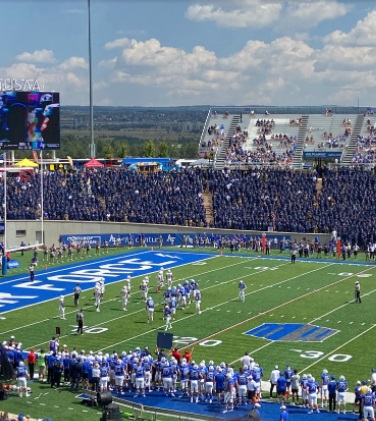 Over Labor Day weekend, I was able to experience my first football game between the Air Force Military Academy and Lafayette College. The United States Air Force Academy, or USAFA, like other military academies, has a tradition of holding “Parent’s Weekend” during every Labor Day weekend. During this three-day period, family and friends are welcome to visit their cadet for scheduled tours, parades, and other enjoyable events.

The football game against Lafayette College was held on a burning hot Saturday at noon. At USAFA’s 6,788 foot elevation, the sun beat down relentlessly on all 30,000 people in the Falcon Stadium. With the football field at the bottom and bleachers wrapped around the stadium, there were exciting things to see apart from the game itself. Stationed at the entrance and at the top level were food trucks with everything from popcorn to burritos to snow cones. Of course, there were still concession stands that sold hot dogs, nachos, and drinks as well.

Sitting under the inescapable heat, I was both worried and excited for how the next few hours would go. With no knowledge of football’s rules, the markings on the field and the electric scoreboard’s structure were entirely foreign to me, I expected to struggle watching the entire game. Even once the official start was announced and the teams were well into the first quarter, I was truly confused as to what players were doing and why they players were moving in certain ways. However, by continuing to diligently observe and listen to the host’s announcements, I was able to piece together the general idea of downs, incompletion, extra points, and many other terms. By the end of the second quarter, I was able to enjoy the game as much as the rest of the crowd. The rush of the players excited me as well, and I was entirely engaged for the next two hours as points started climbing. At every interception and successful down, I found myself growing increasingly thrilled. With the help of a snow cone and a cup of ice cream, I endured the heat of the game and the weather. As a dramatic addition, USAFA won the game 35-14. Even though I left the stadium drained, I thoroughly enjoyed my time and my first football game.