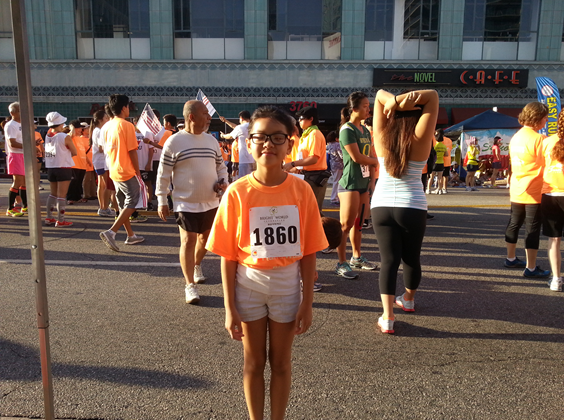 This article was created from a combination of two submitted articles by student reporters Annette Lee and Grace Jhu.

On Saturday, Sept. 14, about five hundred people of all ages came out bright and early to the intersection of Western Ave. and Wilshire Blvd. to take part in the Third Annual Love Share 5k Run/Walk hosted by Happy Village, a non-profit charitable organization associated with the Korea Daily and devoted to increasing public awareness of community issues. The event’s slogan was “Fight Against Childhood Obesity!”

Partnered with Michelle Obama’s “Let’s Move!” campaign, the event’s main goal was to promote awareness of childhood obesity and the importance of being physically active. Proceeds from the $20 registration fee went to obesity-related research. In addition, Happy Village wanted to “honor the firefighters and police officers who served our nation in remembrance of 9/11,” according to CEO Ke Hong Ko.

This year, organizers made it easier than ever for people to get involved with online registration as well as on-site. The event was considered to be a huge success amongst the various participants, volunteers and supporters. Many community leaders and VIP runners also took part, such as Olympic hero Dr. Sammy Lee and various singers, council people, mayors of nearby cities and presidents of local organizations.

“It was awesome,” said Leo Club volunteer and runner Kevin Lee. “Running with so many people, it felt like we were really all working together as a community.”

The runners varied from children to senior citizens in wheelchairs also determined to participate. They wore special shirts with their bib numbers pinned onto the fronts and started running the five kilometers (about 3.2 miles) at 9:30 am.

“The message to get moving and exercise is great, especially since people nowadays don’t move as much,” said teenage runner Christine Lee. “The singers and community people really pumped up the mood a lot, too. I’m amazed at the people who are participating in wheelchairs and especially even the little kids who are running with all of us.”

Volunteers from “Let’s Move California” prepared bags full of healthy treats and informational pamphlets about healthy lifestyles to be handed out to participants as well as spectators.

Volunteer Armando Alvarado said, “Childhood obesity is on the rise. Three out of five children in the United States are considered obese. Children need to eat healthily, exercise and be more active instead of sitting at home playing video games.”

Childhood obesity rates are rising at a staggering rate particularly due to the sedentary lifestyles of most children. According to the Center for Disease Control and Prevention, “childhood obesity has more than doubled in children and tripled in adolescents in the past 30 years.” Children who are obese are more likely to be obese as adults, which can lead to many health problems.

Fortunately, events like this one are having a positive impact on participants like eleven-year-old Lyndsey Kim, who has been running in the Love Share 5k Run/Walk since its inception.

Lyndsey stated, “I enjoy running, keeping in shape, and being healthy. Sitting at home, watching television all day long is boring.”