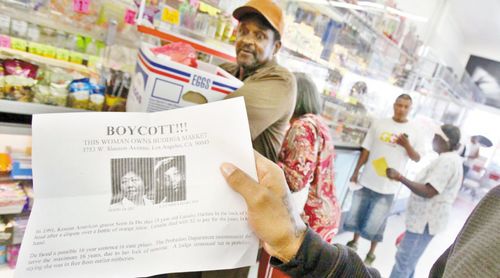 On August 5, Civil rights activists led a successful “buy-in” at Buddha Market in South Los Angeles after Korean shopkeeper Annie Shin was mistakenly targeted by a boycott and rumor campaign.

Buddha Market owner Annie Shin was misidentified by members of the community as another Korean shop owner, Soon Ja Du, who killed a black teenager in March of 1991. Du shot 15-year-old African American Latasha Harlins, who she believed was stealing orange juice, less than two weeks after the videotaped beating of Rodney King by police officers. Though convicted of voluntary manslaughter, Du received a $500 fine and was sentenced to community service with no jail time. The sentence inflamed racial tensions in the period that would culminate in the riots of 1992.

According to the Los Angeles Times, Du’s store was destroyed during those riots and never reopened.

This summer, however, flyers began circulating with a picture of Du and bold print reading, “BOYCOTT! THIS WOMAN OWNS BUDDHA MARKET.” In addition, posts were made on websites Yelp and Foursquare warning potential customers that the owner might “stand her ground and kill you too.” Angry customers visited her, prompting her to show her citizenship papers.

Shin was confused and upset by the allegations. Quoted in the LA Times, she asked, “Why Buddha? Why me?”

In response, Urban Policy Roundtable President Earl Hutchinson announced a 24 hour “buy in” campaign to support Buddha Market. The campaign was publicized to both black and Korean residents through the radio, news stations such as CBS and online. Though the amount of customers was not mentioned, Hutchinson said that the response was “overwhelming.”

On the American Urban Radio Network, Hutchinson said that this shows great progress from the “ill will that once existed between blacks and Koreans in South LA.”

“I feel the response to the situation was appropriate and it shows the progress we have made as a community in racial tensions,” said Christian Ralph, a Loyola High School alumnus and former member of the Young Black Scholars program, in an interview with J Student Reporters. “What happened in the past should remain in the past.”