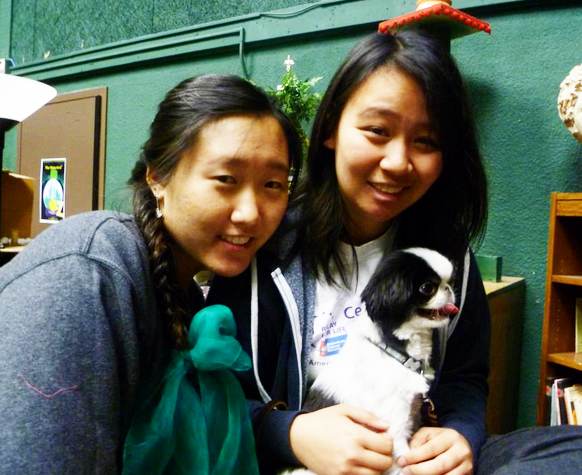 Seven-year-old Suki Peterson made her stage debut in this month’s performance of Irvine High School’s The Wizard of Oz as Toto, Dorothy’s beloved dog.

For some school musicals requiring animals, students dress up as animals. Others use stuffed toys. Yet drama director Danyelle Dunavold and choral director Tina Peterson, who is Suki’s owner, agreed it would be fun to feature the deaf Japanese Chin.

“My dog is little, and she likes to sit in baskets,” Peterson said. “[I thought] maybe she could do it, so I brought it up at one of our production meetings and it worked out just fine.”

Peterson believes Suki was born deaf. She viewed Suki’s deafness as an advantage for the show, not as a handicap.

“She can’t hear, so a lot of the applause and explosions didn’t bother her at all,” Peterson said. “She’s also very visual because she’s deaf, so she was very good at looking at Dorothy when she was singing. [It was] like she was actually acting.”

A caretaker remained with Suki at all times during the performances and rehearsals. Junior Jiwan Kim and senior Lilian Wang took care of Suki pre-show and backstage, mediating any stress she was having.

“Suki is so calm and easy to work with,” Kim said. “I think it was mostly because she’s deaf, but she was still energetic. Suki was just perfect for the role of Toto.”

Wang, who was jokingly called the “dog wrangler,” spent the most time with Suki of all the students.

“I would love to work with Suki again,” Wang said. “She would always welcome you with licks and kisses, and stare at you with big, irresistible eyes. It was really fun for me to play with her.”

After the show, Suki returned to her relaxing home life in Long Beach with her half-sister Hannya.

“Their lives are very, very posh at home,” Peterson said. “They sleep all day in their little doggie beds. Lots of times when we come home, they’re sitting on the deck overlooking the ocean, sunning themselves.”