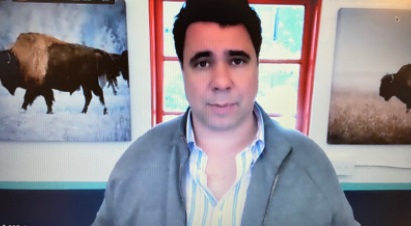 On Monday March 15, Granada Hills Charter High School started their career week featuring speakers from a variety of fields, including politics/government, technology, medicine, art, and engineering. The first speaker of the week was Bill Burton, former Deputy White House Press Secretary under the Obama Administration. During his presentation, Burton explained how he initially got into politics, what his job was like in the White House, and gave advice for students looking to pursue jobs in the fields of politics, journalism, or communications.

The main focus of Burton’s presentation was his personal experiences and lessons that he learned from getting into politics.. The main advice that Burton gave was to be involved and volunteer in your community. He explained that volunteering for officials at any level (city, district, presidential, etc.) is one of the best ways to make connections that are beneficial for a career in politics. Burton also stressed the importance of maintaining meaningful relationships. Burton stated that keeping good connections and relationships would take you much further in the field of communications. One particular story that Burton shared was how he ended up being a part of the Obama campaign. Before the 2008 election, Burton worked for a congressional candidate who had ended up losing his race by more than ten points.

Once in the White House, Burton talked about the valuable lessons and experiences that he had. One anecdote that he told was when Obama first entered office. At the time, Burton never had the experience of speaking on behalf of such an influential person. Part of his job was to brief press on behalf of Obama. When an article by CNN came out the next day with a headline that stated exactly what Burton had said, he realized how much weight his words held. At the career week presentation, Burton said that he realized he was not only speaking on behalf of the president or the White House, but on behalf of the entire United States. During his presentation Burton also talked about what a typical work day was like. He said that he never had a concrete set of work hours because his job depended on what was happening in the world. He could be called to work at any given moment if something had happened that affected the administration‘s image. Burton talked about how this experience helped him build stamina and work ethic.