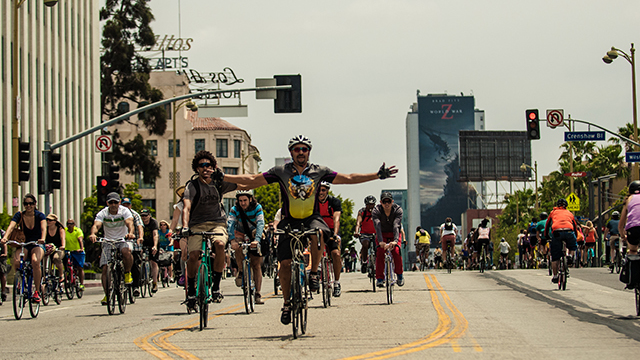 CicLAvia, a semi-annual event during which some streets of Los Angeles are closed for cars so that bikers, skateboarders, joggers, and pedestrians to enjoy car-free public space, will be held on Sunday, April 6.

During the event, the streets are open for any recreational activity. Not only will people be able to exercise, they will also be able to experience the diverse cultures that surround Los Angeles and interact with different communities. According to http://www.ciclavia.org, CicLAvia promotes improved public health, increased public space, enhanced community and economic development, and increased use of public transportation.

CicLAvia was inspired by Ciclovia, a weekly street closure that activists and city officials planned as a result of the car traffic and unsafe streets in Colombia over 30 years ago. Ciclovia means “bike way” and it helped change the city streets become more pedestrian-friendly. Ciclovia quickly spread to Latin America and the United States.

In 2008, a group of activists and pedestrians worked to get a similar event to happen in Los Angeles. The name was changed to CicLAvia to show that the event was in Los Angeles. It started off as a small block closure and has expanded to include a route will start from Downtown Los Angeles and end at the Miracle Mile. Organizers have hopes to have future events in East Los Angeles and the San Fernando Valley.

Harvard-Westlake’s Head of School, Dr. Jeanne Huybrechts, attended CicLAvia last year and enjoyed it. There were signs posted on the streets that read “Share the Road” and Dr. Huybrechts was inspired to use “Share the Road” as the school’s theme to represent the journey that all the students take in their lives.

She told the school that she noticed that the event made biking more enjoyable for her because she was with other people. She wanted all the students to know that sharing their life journeys with each other was going to be more enjoyable than experiencing it own their own.

Others are getting excited as the event nears.

“My kids are already counting down the days until CicLAvia. They are so excited to have a fun day with their friends and family,” said local parent Sunny Choi to JSR.

The event is open to anyone who wants to attend.