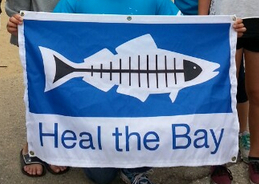 Heal the Bay is known for its work in beach conservation, but Coastal Cleanup Day is special because volunteers from all over the world clean up local rivers, beaches, creeks, and parks. Participants go not for the fun of relaxing at the beach, but for the thought of picking up trash with thousands of other people around them. Specifically in California, there are approximately 50 different sites that Heal the Bay organizes in Los Angeles.

“It truly is amazing to see so many different people from all over Los Angeles cleaning the environment,” said Jacob Lee, the president of the Green Idea Club at Van Nuys High School, in an interview with JSR.

“When one is told to pick up trash on normal days, they would refuse and say that it does not ‘belong to them,’” Lee continued, “However, during Coastal Cleanup Day, people pick up literally everything they see and are absorbed at what they find: [an assortment of litter] and even dead organisms.”

The work would not have been possible without the help and assistance from the volunteers eager to work and clean. Many enjoy what they do at Coastal Cleanup Day and participate annually.

However, Coastal Cleanup Day is not the only time Heal the Bay takes action in cleaning beaches. Heal the Bay also hosts beach cleanups on the third Saturday of every month. Ranging the various beaches in the Los Angeles region, these cleanups are open to the public and offer volunteer hours and raffle prizes at the end of each cleanup. To learn more, visit healthebay.org.

According to Lee, “If only the people realized that picking up trash not only on Coastal Cleanup Day, but also on an everyday agenda, it would strongly benefit our environment.”