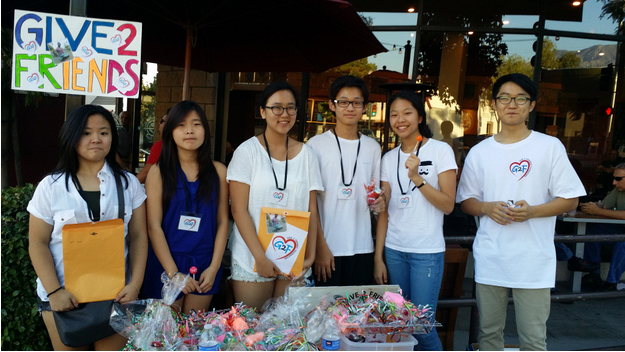 Give2Friends Foundation (G2F), a student-run organization founded in La Crescenta that has expanded to nearby communities as well, was created this year by the cooperative efforts of both students and adults who hope to aid the community through fundraisers and local events.

The focus of G2F is to raise money and offer monetary assistance to other charitable organizations both near and far. Every year, G2F will help one or more organizations through fundraisers and events. This year, G2F is helping Shalom, an organization that buys wheelchairs and crutches for the disabled in Africa.

The founders’ focus is to create a force of strong-willed students who really want to help the world. In creating this club, many of its founders struggled through various issues. A big difficulty was the issue of making G2F an official foundation, which required the help of parents in signing official paperwork.

When contacted by JSR, G2F president Stephanie Ha said, “We hope that people see and acknowledge our efforts because getting to where we are today took lots of effort from both the founders and the parents.”

Currently, branches have been established at Crescenta Valley High School, Village Christian Schools in Sun Valley, Ribet Academy in Glassell Park, and Albert Einstein Academy in Santa Clarita. Overall, G2F has around 70 members and many parent volunteers as well.

Grace Kim, the student public relations director, told JSR, “To make the community involved in our foundation, we’re hosting a golf tournament this November to raise money for Shalom and initiate G2F as an official foundation.”

So far, Give2Friends has been able to raise more than $10,000 from lollipop sales, golf tournament entries, and sponsorships.

“We’re different from other groups because our group was made from scratch and by students. We’re not branching from another main organization. Instead, we created this organization in the hope that other clubs will branch from our organization,” David Lim, the vice president of G2F, told JSR in an interview.

Members and officers alike agree that G2F is a different club from other clubs because, according to Kim, “We are a group that works as a collective force to solve problems not only in our community, but also the world.”