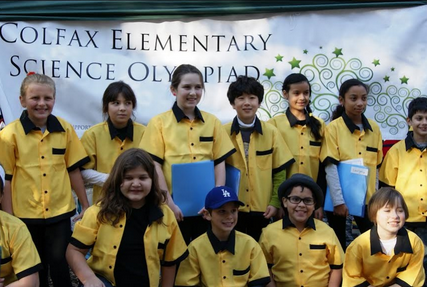 Science Olympiad (SciOly) is an academic competition for K-12 students in which teams of 15 students from each school show their prowess in 20 different science and engineering events. In the elementary division, teams earn medals according to cutoffs on their overall score. For example, if a school comes up in the top 30% or so, it will be awarded gold medals.

According to an unofficial tally published on the day of the competition, Colfax was near the top of the pack of teams that earned silver medals this year. 2014 was Colfax’s second year in Science Olympiad; the team received silver medals last year as well.

Lacey Kim is the head volunteer coach of the team and one of several members of North Hollywood High School’s Science Olympiad team, which has a history of doing well at the state level and provides assistance to the Colfax Team.

“We, as a team, were satisfied with the silver medal [last year], as it was our first competition,” Kim said in an interview with JSR before the competition.

“Although achieving high is important, we put more significance on giving students the opportunity to explore the different fields and enjoy science,” she continued.

Austin Kim, a fifth grader and the current student co-president of Colfax’s SciOly team, told JSR that this year’s team is very different from last year’s team, who earned the most points in building events such as “Tennis Ball Catapult” and “Egg Drop.”

Before the Oiympiad, he claimed that “for the study events, we are really prepared, but the building events [are lacking attention].”

However, at competition the 2014 Colfax team excelled in the engineering events and earned its most points in “Can Race,” “Tennis Ball Drop,” “Knock Knock Who’s There?,” “Making and Using a Key,” and “Mystery Architecture.”