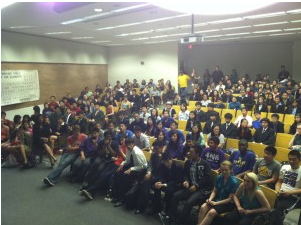 On the morning of Saturday, Sept. 28, high school students in formal dress could be seen swarming onto the campus of California State University, Long Beach to compete in individual speech events, debate events, or both. Over the weekend, dedicated students spent their time competing, doing homework, and most importantly, enjoying themselves.

The Jack Howe Memorial Speech and Debate Tournament is one of the largest competitions in California and one of the oldest and most distinguished high school tournaments on the West Coast. Jack Howe, for whom the tournament is named, created the Foundation of Beach Forensics of Long Beach in 1951. The tournament “acts as an annual celebration of Dr. Howe’s contributions to forensics and his vision of offering a transformational educational experience to all participants.”

Although dedicating a weekend to an extracurricular may seem daunting, many students value the activity and remain avid learners and participants in the speech and debate community.

Lincoln-Douglas debate competitor Eugine Chung, a junior attending Granada Hills Charter High School, says, “Sometimes I wonder if I should stay home and study for SATs, but then I remember the merits of going to debate competitions. It’s an amazing opportunity to meet and debate people from different parts of California. Although victory is never guaranteed, it’s a good self-check to see what I have to improve on and where I should derive my confidence.”

Although speech and debate tournaments are competitive, this aspect actually encourages improvement and motivation within the individuals involved.

Taylor Li, a junior at Westlake High School, shares: “Debating for me has always been about improving myself and not necessarily “beating” the opponent. I feel that debate argumentation shouldn’t be about trumping the opponent’s logic, but enhancing it and allowing for educational discussion. After all, that’s what debate is all about.”

Senior at Cleveland High School Kevin Kim appreciates the exposure that he has gained through speech and debate. He says, “Through participation in competitions and even practices, the activity has opened me up to not only the world around me, but also brilliant mentors and amazing people. In my debating experience, I have met some of my closest friends and have learned skills that present themselves in any social setting, class presentation, and essay.”

By meeting new people and gaining exposure to different experiences, speech and debate acts to transform individuals for the better by instilling in them values of confidence and honor. Learning and practicing are key factors of success when it comes to the skill and art of speech and debate. By application in tournaments such as Jack Howe, competitors learn the value of communication and friendly competition.