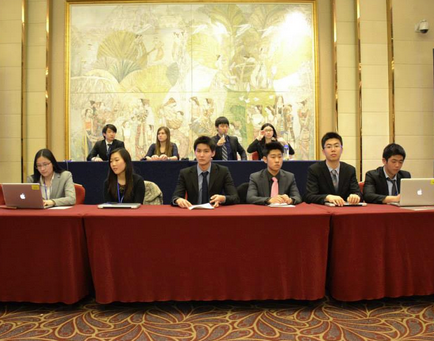 The annual Beijing Model United Nations (BEIMUN), hosted by the International School of Beijing, began at the Crowne Plaza Hotel in Beijing, China on Wednesday, March 11 and concludes on Saturday, March 14.

For its 22nd conference, BEIMUN invited a wide range of students from all over the world to participate as delegates, advocates, and student officers at a conference with the theme of peace and security in the 21st century.

An educational simulation and an academic conference in which students learn about diplomacy, international relations, and the United Nations, MUN teaches research, public speaking, debating, teamwork, and leadership.

“MUN is an important medium for both personal and intellectual growth. The social finesse and topical mastery required during lobbying and debate instills the value of diplomacy and dedication,” said Harper Thomas, a student officer on the Economic and Social Council from Shanghai American School Pudong, to JSR.

“Commitment, open-mindedness, and collaboration are all critical aspects of Model UN,” he added.

Min Byung Chae, a student officer on the General Assembly First Committee from Seoul Foreign School, told JSR that he hoped members would “explore the issues from various viewpoints, exercise their creativity in devising ingenious and pragmatic solutions, converse with other delegates and chairs, persuade the floor of their strong opinions, and critically examine each others’ solutions and arguments.”

With more than 1,000 students from schools, representing over 100 organizations and countries, the level of debate was intense, with delegates discussing and cooperating with one another to create a plausible resolution to be debated. According to Kevin Han, the delegate for China in the MUN Security Council, preparation has been an educational experience.

“I wasn’t as aware about the Yemeni Revolution of 2011 prior to the preparation of this conference. I’m excited to take part in the Security Council for the first time of my MUN career,” he told JSR.

“We had to write hundreds and thousands of words of research and clauses. But I learned so many new things from doing so,” Claire Yoon, the delegate for France on the Economic and Social Council, added.

Conference participants were greeted with a warm welcome from the Under Secretary General, Kimberly Yan of the International School of Beijing.

Speaking before the start of the conference, she said, “I hope that BEIMUN XXII will be an enriching and gratifying experience for everyone, whether it be your first conference, last MUN hurrah, or a conference somewhere in the middle of your MUN career.”