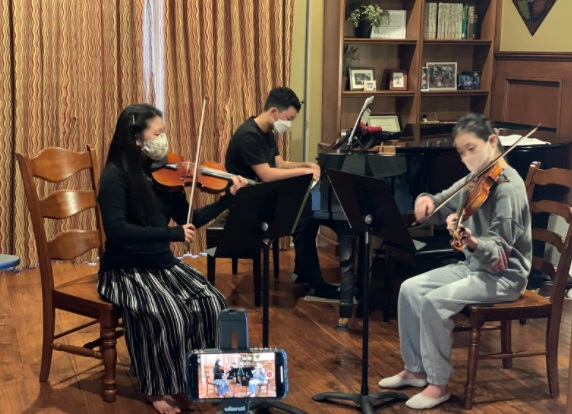 Music is an essential part of human life, and it unites people during all situations, especially during hard times. One source of live classical music is the Junior Chamber of Music, known as JCM, which is a prestigious program that gathers musicians from the ages of 9-20 to experience playing professional chamber compositions. Established in 2003, Southern California based JCM is made up of four chapters, located from Los Angeles to the Inland Empire. Chamber music is a type of classical music popularized in the 17th century and traditionally played by a small group of instruments and performers. A wide range of instruments, including violins, cellos, and pianos, are common to the form, and JCM students in duos, trios, quartets, and quintets play various pieces from the chamber music canon. In various workshops, the student groups are coached by professional musicians who give tips based on the type of instrument and piece that they are playing. As they continue to hone their musical skills, some groups perform at a professional level in concerts and tour other countries.

One JCM performer I know personally is my brother Jeremiah, who joined JCM last year, and is currently enjoying his second year performing as a pianist in a trio with two other violinists. Although JCM was established as a live performance group, the usual circumstances have changed due to Coronavirus, and Jeremiah and his fellow musicians began performing virtually last year. There were three members of the group: Jeremiah Chun playing the piano, Amy Han playing the violin, and Elysia Han also on violin. They performed the piece “Three Duets for Two Violins” by Dmitri Shostakovich, but they had to record their piece and submit it online. The coaches for Jeremiah’s team were Anna Kostyuchek and Robert Thies. The three musicians spent hours practicing together and mastering their craftsmanship, while also building chemistry and developing visual cues to remain in sync despite the social distancing. Last year, the group achieved the Honor rank from the JCM organization after being judged by professional musicians. Once they received the honor rank, they were supposed to perform a recital in front of a live audience, but were unable to do so due to the circumstances.

This year, the group returns with a new piece and some minor changes. Camille Song, who is playing the violin, joined Jeremiah and Elysia to play “Suite for Two Violins & Piano Op 71 (Movement 2)” by German composer Moritz Moszkowski. When asked about this piece, Jeremiah described it as being “playful” and “uplifting.” He continued by elaborating on how, “the violins are having a conversation with each other while the piano is supporting, which makes the dynamic of the song very interesting.” Elysia Han also emphasized the importance of “making sure that we move on no matter what mistake we make and being to match each other so we sound like one instrument.” As the date of their performance draws closer and closer, these musicians continue to perfect and master their piece.

Although life is much different than it was just a year ago, live music, such as that performed by the JCM, is an important part of life that must keep going. It is exciting to see chamber music continued for so many years, and we should all look forward to seeing live music again in our future.