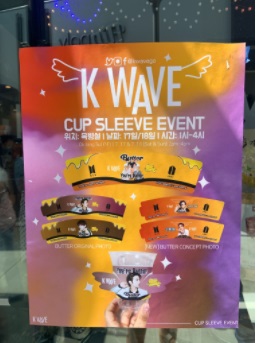 With the burgeoning rise of Korean culture, fans in the United States have become obsessed with all things relating to the global phenomenon. Thanks to K-pop groups such as BTS, events, merchandise, and information surrounding Korean culture has created a craze among fans. KWAVE is an upcoming source for these fans to communicate about Korean music, movies, fashion, food, and other entertainment. Not only is it an excellent site to read news about K-pop idols, share with friends, and post, but points are earned for participating in the site, which can be exchanged for merchandise.

One of KWAVE’s new events was a BTS Cup Sleeve Event at the Source OC Mall in Buena Park, California. The company partnered with Okbingsul to promote BTS’s song “Butter.” To receive a cup sleeve, a few simple steps had to be taken. First, customers had to follow KWAVE’s instagram, @kwavego. Then, a drink offered by Okbingsul had to be purchased, which came with the cup sleeve, decorated with the “Butter” song, plus the members of BTS sprawled across. A raffle took place simultaneously through KWAVE, in which customers had the opportunity to win $1,000 worth of K-pop merchandise. In order to enter the giveaway, all one had to do was create an account with KWAVE, and then get a raffle ticket. BTS water bottles, calendars, posters, socks, mic speakers, and more, could be won, with winners being announced at the end of the event. Hundreds of Korean and non-Koreans alike formed long lines outside Okbingsul for the cup sleeves and raffle. Teenage interns for KWAVE helped control crowds and explain the event from their booth in front of the shop. Although it was nearly 95 degrees outside, the crowds of fans was a testament to the immense cultural impact that K-pop and Korean culture has had on Americans and non-Koreans in general. Also in the Source mall are various stores solely there for the purpose of selling K-pop related merchandise. As Korean culture continues to spread, newer mediums of distributing merchandise have grown, from in person stores, to digital content markets like KWAVE.

KWAVE is taking this opportunity of peak Korean cultural interest to give the masses of K-pop fans an outlet to express and communicate their love for bands such as BTS. Their social media platform is new, but growing rapidly. More events, such as the BTS Cupsleeve, will occur through KWAVE, giving limited edition merchandise to fans. The social media platform is free and easy to navigate. Users can bring their K-pop interested friends and make new ones on the website to continue the global conversation, while also gaining points. K-pop fans are rewarded by simply using the app. To find out more about KWAVE, make an account at kwave.ai.