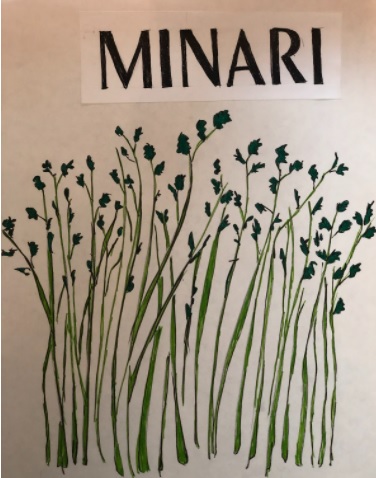 As people search for sources of entertainment during quarantine, many have shifted to watching movies from home. Movies have always been a favorite way to pass the time, but with theaters temporarily shut down, one can still use a wide variety of online platforms to offer access to many features films and shows with a click of a button, from the comfort of one‘s own couch. I have recently watched numerous films – mostly action and comedies – before landing on a somewhat mellow story that piqued my interest, Minari.

Minari takes place in rural Arkansas during the 1980’s, and focuses on a Korean-American family who are trying to achieve the “American Dream”. The Yi family consists of Jacob and wife Monica, played by Walking Dead’s Steven Yeun and the captivating Han Ye-ri, in her first American film, and their two children David and Anne,Alan Kim and Noel Kate Cho in their screen debuts. The family has just moved from California to Arkansas in search of a new life, where Jacob has purchased land for a farm to grow Korean staple crops, which he plans on selling to Korean American grocers. The family tries to adapt to their new surroundings, but Monica is skeptical of the new business venture and thinks her family was better off in California. Jacob and Monica argue over the situation while adjusting to their harsh surroundings, but agree to have Monica’s mother, Soon-Ja, come from Korea to live with them. Soon-Ja moves into 7 year old David’s room, and although at first David dislikes his grandmother for her cultural quirks, they gradually develop a charismatic relationship.

The dialogue is primarily spoken in Korean, yet, the overall storyline is profoundly American and focuses on the American lifestyle. Many immigrant families can relate to the Yi family’s hardships of American assimilation and trying to find one’s place in such a vast country. As Jacob and Monica take on demeaning work in order to make their dreams come true, they meet curious characters along the way, including a deeply religious neighboring farmer played by a hilarious Will Patton, who help them integrate into their community and understand the Arkansas way of life.

As a Korean-American myself, this film really resonated with me, as I was able to understand some of the dialogue and make connections to my own life. Aspects of Korean American culture remain imminent throughout the film in details frome cuisine to the traditional phrases that were spoken, and even the title of the movie is taken from the minari plant, which is grown and consumed in Korea.

The various themes that are presented in the movie can be applied to today’s society in spite of the unprecedented times that we are experiencing. The minari represents its humble origins and personifies the perseverance of the family during the tough times, a theme that resonates with so many of us as we enter another month in quarantine, awaiting the end of a grueling pandemic.