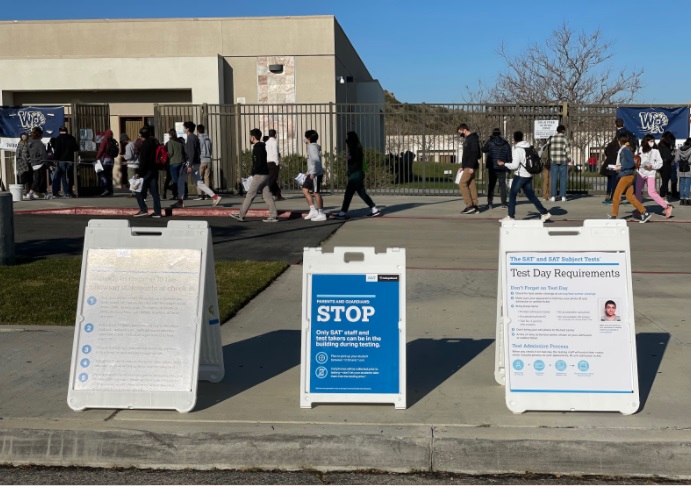 On March 13, 2021 I took the SAT along with thousands of other students all across America. The Scholastic Aptitude Test, better known as the SAT, is a standardized test that is used in college applications. The number of students who are taking the SAT has exploded, with a record breaking 2.2 million students from the class of 2020 who are taking the SAT test at least once. The test is offered 7 times every year during the months of: March, May, June, August, October, November, and December.
I took my first SAT at my own high school, West Ranch. The school served as a testing center, as others were closed nearby. In the final days leading up to the test date, students previously testing in the LA area were reassigned to my school because those testing sites were still on lockdown. When I first arrived at West Ranch, everyone had to have smartphones to scan a QR code, and we had to fill out a questionnaire similar to what one might fill out at the doctor’s office in order to alert them to any COVID symptoms. Additional safety measures were taken in the form of entering and exiting the school in an orderly and distanced fashion, but these proved a bit confusing. We were assigned rooms by random selection and after locating that information on a poster, we then had to find the appropriate line that led us to our room.
Even though I was taking the test at my own school, it was complicated to find my room because I haven’t been on my school campus in such a long time. I can only imagine how disorienting and confusing it must have been for students coming from out of town. Masks were required throughout the whole 5 hour process, from arrival to test completion, and it was difficult for people wearing glasses, such as myself, because they were constantly being fogged up. Between the time it took to file into the school properly and waiting for late arrivals, (many of them no-shows) our 8 a.m. test start was pushed to 9:40. Other than the late start and general nervousness, the rest of the day went smoothly.

I was both excited and nervous to take the SAT test for my first time, especially after anticipating it since the fall. It feels good to take the first step towards my college goals, and although I may have to take the SAT again, I at least know how the process will work. I no longer have to dread something that had been so intimidating for so long, and as each month passes during the vaccine phase of Coronavirus, test takers can increasingly look forward to the return of normalcy, whose appreciation will be felt even in the unnerving world of standardized testing.