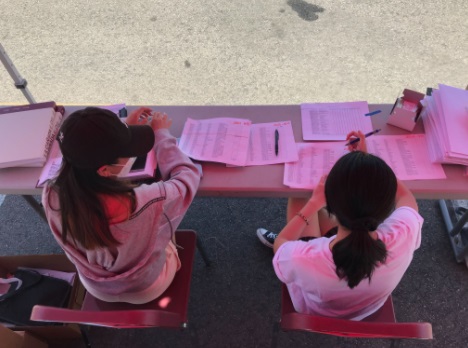 La Canada High School’s 2020-21 yearbook was completed in early June, due to most of the school year being online. It was also the same for the 2019-20 yearbook, as there was a lockdown in the second semester of the school year, causing a production delay. However, the 2021 yearbooks arrived on July 20th, which was just in time for a summer distribution and before all the seniors went to their colleges. A drive-thru distribution occurred from July 27th to the 29th, and safety precautions were taken in caution of the coronavirus and the Delta variant.

Parents and students were allowed to pick up their yearbooks in a social distancing format, with precautions such as wearing masks and keeping distance from each other. Seniors, the class of 2021, were the first to see the books, and the first day of distribution was just for them. The second day was for the class of 2022, 2023, and 2024, and the last day, was a make-up day for all grades.

Noemi Fusco, a rising senior at La Canada High School, stated, “I thought the drive-thru distribution was super quick and easy, while also staying at a distance to ensure the safety and health of every student. I also really appreciated the yearbook distributors for their hard work all day in the heat.”

Those who helped out during the summer distribution were part of the new yearbook staff, specifically the members who attended yearbook camp during the summer. Each of the staffers took on at least two of the many time slots to help volunteer with the distribution. There were three booths set up with three tables, pop-ups, and several chairs outside on the Oak Grove front parking lot. In addition, the distribution lists were in alphabetical order by last name and grade.

Before the distribution days, I created posters to mark which graduating class would be in which section, and taped the posters on boxes for the drivers to see easily. This helped because we had no issue with students and parents trying to find the right pick-up location. Furthermore, when they picked up their yearbook, we had them sign next to their names on the list so that there would be no confusion in whether they received their book or not.

We had a successful yearbook distribution, as many students picked up their yearbooks, and we received more sales in the product than past yearbook staffers created. In fact, many people were surprised to see how much content we had gathered during the COVID year, from Zoom classes to virtual assemblies.