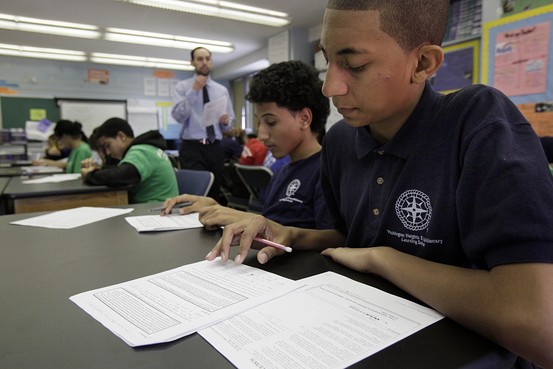 Cheating has been a growing issue in the educational system in recent years, suggesting that society values academic grades to a greater extent than students value the genuine purpose of education.

It wasn’t long ago that students cheated using cheat sheets or by writing answers on their arms, palms, or even on the soles of shoes. But with the advent of advanced technologies such as smartphones, cheating has reached an all-time high. With the use of these phones, students can search and share answers on exams, making previous methods seem extremely primitive.

Many Teachers Turn a Blind Eye

Cheating is so rampant that some students report that teachers even ignore it. Oscar Romero, a sophomore at Hollywood High School, stated in an interview with JSR, “[Almost] Everyone cheats with their phones and it is apparent that most students who cheat do not get caught these days.”

The students who do get caught cheating are reprimanded minimally, according to Hollywood sophomore Maureen Felix.

“I know some kids who have been caught cheating,” Felix told JSR. “Nothing much happened to them. They weren’t even sent to the principal’s office.”

High school teachers and administrators must assign harsher punishments so that students understand the ramifications of cheating. Even receiving a single “F” on an assignment, quiz, or test may not be enough to curb cheating.

Yet cheating can damage a student’s later academic career; if a student is caught cheating in college, that student can get expelled for academic dishonesty.

Why Do Students Cheat?

Students who successfully cheat on one exam are likely to continue to cheat.

“At first, I was only going to cheat once,” an anonymous junior who has cheated through all three years of high school admitted to JSR. “But then I realized I didn’t get caught, and that I could do it again. So I did. It was kind of addicting, to be honest. I knew I could do it again, and I knew it was for so much less effort so I figured, ‘why not?’”

She continued, “It’s hard to ever stop once you know the rewards [of] less effort, less time spent, and higher academic success. After a while, cheating became the norm for me, and I didn’t think I was doing anything wrong anymore.”

Other students, however, simply succumb to the influence of their peers. Through the “domino effect,” some students may end up cheating since every other test taker in the room is cheating.

An anonymous senior claimed, “It seemed like I was the only student in the room to rely solely on my brain. When it became so evident that everyone else was cheating, I felt disillusioned that I was at a disadvantage and wasting hours studying when I could be doing something else.”

However, peer pressure does not only affect testing. Academic dishonesty is prevalent even on simple assignments and homework. “When your friend asks you if she can copy your homework, you’re supposed to say yes,” said local senior Julie Han.

“People get mad and bitter when you don’t let them [copy],” she said. “One guy once called me [an expletive] because I wouldn’t let him copy a worksheet.”

How Are Schools Reacting?

Dealing with cheating is very tricky. Realistically, it may never be completely ended. One method that is finding some success, however, is the use of honor codes.

According to a Lucy Yetmen-Michaelson, a freshman at Harvard-Westlake, “We have to sign a part of the honor code that states ‘I have neither given nor received unauthorized aid on this assignment’ and ‘My name affirms my honor’ on every test. If a student did cheat, it would be hard for that student to sign next to that statement. ”

Yetman-Michaelson added that she believes a school is better able to manage cheating if it has an honor code.

School policy is an extremely important asset not only to the teachers and administration but also to the students themselves. A school’s policy is what keeps the students turning in their homework and tests with moral integrity.

For example, local all-girls school Immaculate Heart implements a very strict school policy that helps both to regulate the students’ actions and to remind them that they are “Women of Great Heart and Right Conscience.” Every year, Immaculate Heart hosts its Honor Code Assembly during which students pledge to maintain their academic integrity for the year to come. By implementing a school policy, Immaculate Heart “strives to reduce these pressures on students and encourages them to see that personal integrity is a transcendent value that is more important than grades and academic evaluations.”

To JSR, Immaculate Heart senior Grace Park explained, “Having a school policy is important, because [we] need to know about [their] rules and regulations.”