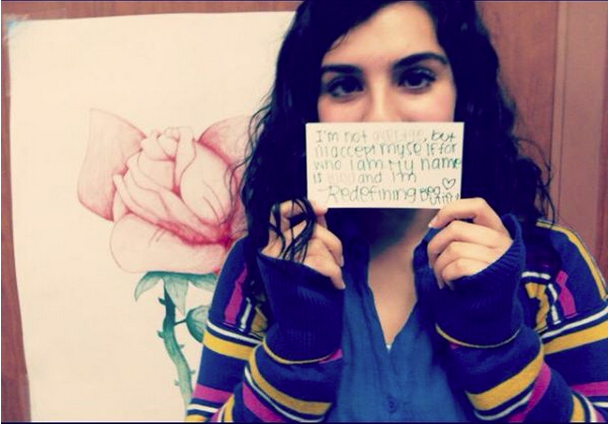 Modern culture has left an indelible mark on societal definitions of beauty and our perceptions of others and ourselves. Yet several local groups have committed themselves to redefining these standards for the sake of health and self esteem.

Advertisements endorse these standards throughout cities, suburbs, and virtually every corner of human civilization. As Tina Fey stated in her 2011 memoir “Bossypants,” this ubiquity means that “now every girl is expected to have Caucasian blue eyes, full Spanish lips, a classic button nose, hairless Asian skin with a California tan… long Swedish legs, small Japanese feet… the hips of a nine-year-old boy, [and] the arms of Michelle Obama.”

Who is responsible for setting these standards for beauty?

What has convinced society to have a desire for such “perfect” appearance?

Whatever the complex factors that have led to this mindset, it is clear that they are impacting students.

“As an avid follower of multiple beauty gurus on the Internet, I noticed that these people promote products that work for them such as laser surgery to get rid of acne,” shared Christina Lee, a junior at Valencia High School (VHS), in an interview with JSR.

She continued, “Watching these gurus even influenced me to consider surgery for clear skin even though I don’t like the idea. People become desperate when they look for ways to be better looking and beauty gurus promoting these products do not help at all.”

Lee, like girls across the world who watch purported experts give fashion and makeup advice, finds beauty and fashion intriguing. However, she notes the adverse consequences of broadcasting the need to use them in order to become beautiful.

“People ask themselves, ‘Why do I look this?’ and ‘What can I do to make myself better looking?’” she said during the interview. “[This] can easily lead to something like depression.”

Celebrities also use various media outlets to advertise new products and procedures that idealize their appearances. This method has been working for years, but many people do not realize the dangers of following trends and copying the celebrity lifestyles. Some consequences include eating disorders after extreme dieting, skin irritations from excessive makeup usage, as well as dissatisfaction, depression, and other forms of self-deprecation.

For those who don’t participate in extreme measures such as surgery, makeup becomes an everyday routine. But though individuals often apply makeup in order to hide their blemishes, it can actually worsen the skin.

According to the LiveStrong organization website, a source for information about public health, makeup can cause a person’s skin to become oily, dry and irritated. Some side effects of makeup can be extreme, to the point of someone developing allergies or cancer. For instance, a 2008 study headed by the Journal of Investigative Dermatology revealed that moisturizers and UV radiation act in very much the same way on human skin, thus making individuals who wear moisturizers more vulnerable to skin cancers.

Men as well as women apply makeup as part of their regular routine: in a survey of a thousand American and British men conducted by marketing company J. Walter Thompson, 54 percent approved of using facial products and nine percent conceded to the use of foundation. The race for a better face is even more intense in South Korea, where men spend the most money on makeup in the entire world. In 2011 alone, makeup sales to Korean men added up to almost $500 million.

Media messages have also contributed to the glorification of the “perfect” body. According to the National Eating Disorders Association, 20 million women and 10 million men suffer from eating disorders in the United States alone; these disorders include anorexia nervosa, bulimia nervosa, and binge eating. Girls can even begin to express concerns about their body shapes and weight from the age of six.

“Everyone is special and unique, and that individualism is true beauty,” said West Ranch High School Psychologist Leana Duzdabanyan in an interview. “There’s something about being different that attracts others to want to interact with you. When you conform to what the media has been telling you to look like, that individualism is lost.”

This concern about the perpetuation of an unachievable standard of beauty by contemporary culture has affected several communities and has incited some people to take action.

For Vanessa Ordaz, a Valencia graduate and current sophomore at the University of Merced, the realities of struggling with body dissatisfaction were all too real. Ordaz’s younger sister had suffered from an eating disorder, and Ordaz said it was heartbreaking to watch her sister endure those issues.

Ordaz brought Redefining Beautiful, an organization originally started in Texas, to VHS in 2011. She hoped to use her personal experience to reach out to other girls and encourage them to accept themselves.

“I wanted to do something that would help embrace true beauty and confidence,” stated Ordaz in an interview with JSR in 2012.

Now, the club currently has almost 100 members at VHS. Every week, members don bare faces and club t-shirts on “Make-Up Free Tuesday” to get the point out that naturally beautiful is the best kind of beautiful.

“In Redefining Beautiful, we hope to empower young girls [with the knowledge] that there are far more desirable qualities than physical beauty and that beauty is finding confidence and strength within yourself without succumbing to the pressures of societal standards,” shared Samantha Sunga, Redefining Beautiful’s current president at Valencia.

“Perfect clothes, makeup, body shape, or even an ideal boyfriend are not the key ingredients to success.”

In conjunction with Redefining Beautiful, other clubs encourage individuals to become independent and confident individuals. By expanding the horizons of these students and exposing them to not only national but also global issues faced by women, these clubs hope to inspire them to look beyond their own experiences.

“Organizations that endorse acceptance instead of materialistic views of beauty are pivotal in today’s society,” shared Professor Levin Welch, the sociology professor at College of the Canyons, in an interview with JSR.

“Perceptions of beauty vary from culture to culture,” he added, “but it is universally important to instill a desire to grow as a person rather than to achieve a particular schema of perfection.”

As society progresses toward innovation and advancement, the very fiber of an individual’s sense of happiness and self contentment should not be so influenced by the media’s perpetuation of a certain definition of attractiveness. Instead, the laudable goals set out by these various student leaders of self-awareness organizations should be broadcast to spread acceptance of ourselves and others.