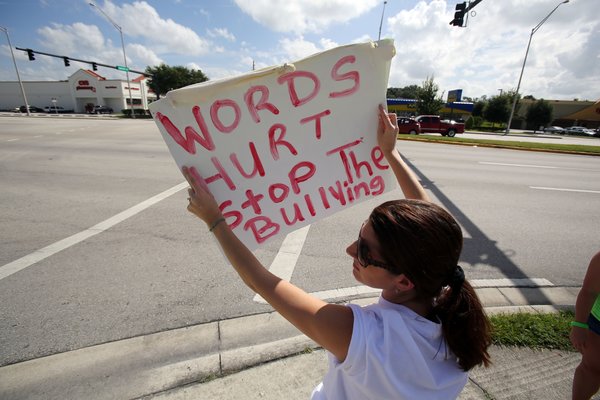 Despite growing media attention and school efforts, DoSomething.org reports that over 3.2 million students each year suffer from cyberbullying, physical beatings or verbal abuse. Bullying occurs at all age levels, from elementary to high school and even college, and 88% of students polled in a recent JSR survey confessed to either being bullied or watching it occur.

That is much too large of a number.

This survey, conducted by group members online between October and December of 2013, shows the prevalence of bullying.

According to the American Academy of Child and Adolescent Psychiatry, almost half of all children will experience bullying in primary or secondary schools. In elementary schools, targets can be attacked for their differences.

Elgin Lee, a sixth grader, told JSR, “I didn’t speak English that well when I was in kindergarten, so the kids in my class made fun of me and my accent. I didn’t have any friends.” He continued, “I couldn’t do anything about it, because I couldn’t speak English to the teacher. I was scared to talk about it too, because I thought the kids would hate me even more.”

The effects of bullying can be crippling to self esteem and confidence, especially in younger children. An instance of bullying can have long-term effects. For Elgin, the effect was a denial of culture.

“I got embarrassed of being Korean,” he stated. “I would hate it when my mom spoke Korean outside of the house.”

His mother added, “Elgin is a bright kid, and he’s always chattering away about something. But… when he was younger, he was very quiet, and he looked scared when people besides his family talked to him. He refused to talk about school.”
It was only once he stopped being a victim that he regained his confidence which led to friends and improved language skills. Paradoxically, once he was no longer bullied, he was able to “fix” what had caused him to be victim. The intimidation that came with his victimization had severely impacted his self esteem, preventing him from talking and improving his English.

Thus, once the bullying stopped and his confidence grew, Elgin was able to speak more openly and improve the very problem that caused the bullying in the first place.

“I think it’d be different now if I went back to that time,” Elgin said. “Even back then, I knew words like ‘stop’ and ‘don’t make fun of me.’ So I would stop being scared and go back and tell them that it’s racist to be mean to me like that.”

Bullying Gets Worse In High School

In high school, bullying takes many forms ranging from cyber bullying to verbal abuse and even racism. In May 2013, Agoura High School made national news when racist graffiti and “hit lists” including the names of five male African-American students were found on the walls around the campus. These students were threatened with murder or with being sent “back to Africa.”

Though there has been speculation that the incident may have been a hoax, it nonetheless led much of the school’s African-American population to fear going to class.

Lamar Patterson, an African-American student at Agoura, told KABC News, “It doesn’t feel right coming. But I start testing today, so I can’t miss school. I hope it doesn’t get out of hand.”

An African-American freshman student who was targeted by the lists transferred schools after the incident.

“I was freaking out for few days when I saw my name on that list,” the student told JSR. “Since then, Agoura High School was never a safe place for me.”

Agoura High is not the only school with a bullying problem. A student at Valencia High who wished to remain anonymous said, “Eighty percent of the class called me things because I was not good at English, even though they were Koreans themselves.”

Bullying can have severe effects on the growth of high school students who are still in the midst of maturing, according to the anonymous student. “It was a horrifying experience,” the student said, “and the reason why I moved to a different town to get away from them. It left me with a fear of being bullied again. I became very self-conscious.”

The Valencia student is just one of many silent victims of bullying. In an online survey conducted by JSR, numerous students from a multitude of schools confessed their experiences. Some were common, such as teasing, name-calling, and sexual harassment. Others were infrequent, but severe, such as racial slurs and ostracization.

Unfortunately, students don’t leave the bullying behind when they move on to college. One UCLA student told JSR, “Bullying doesn’t end after high school. Things are tough even as a collegiate level student. I’m tired of this.”

Why Does Bullying Happen?

Although there have been constant attempts to attack this problem from many different angles – with awareness ads, attempts at more effective administration, and discipline – one question remains at the heart of the problem: why do bullies bully? It is a difficult question to answer, but multiple JSR interviews with past bullies have revealed some of the underlying reasons.

For some, the initial push was peer pressure.

“Back in elementary school, I was a part of a group of friends that bullied this one kid,” said a former bully who wished to hide his real identity. “It wasn’t like I wanted to pick on him. I just thought, ‘Oh, my friends are doing it, I’ll conform.’”

Teens, due to their social nature, often exhibit a pack mentality. While that can be beneficial sometimes, such as when it encourages students to participate in clubs or volunteer, it can also be detrimental.

“I was just scared that I’d be bullied if I didn’t participate. I didn’t want to be the victim,” the bully stated.

For some aggressors, internal conflicts pushed them to lash out.

“Even just recently, I had a lot of trouble with my grades. They were much lower than I wanted them to be, and it made me feel really stupid and inferior,” said another former bully who asked to remain anonymous. “When I picked on underclassmen, it made me feel powerful. It made me feel better about myself.”

Shame is a common factor in bullies’ hurtful behaviors, according to Dr. Mary Lamia. Writing in Psychology Today, she said that failure to live up to personal standards can lead to negative reactions. Bullies who are “shame-prone” tend to transmit their shame to others by bullying them, says Dr. Lamia. Because bullies tend to have an unusually low tolerance of shame, they attempt to deal with it by pushing it onto their victims.

What Can Be Done?

Fortunately, schools and communities are cooperating to combat the horrors faced by victims of bullying.

For example, the city of Santa Clarita has sponsored a non-profit organization to spread awareness of bullying. Known as The Santa Clarita Valley (SCV) Youth Project, the company works with troubled teenagers and assists them in overcoming personal issues. Each meeting is headed by a peer counselor who meets with a student one by one.

Lauren Richardson, a peer counselor and program coordinator, works tirelessly to ensure all of her students feel secure. She told JSR, “The youth project allows me to open my eyes and see firsthand what these kids have been going through. Through our methods of intervention, parent support, and counseling, I have been able to see a number of positive outcomes.”

“When the students have quite a bit to say, I let them continue,” said Richardson. “Eventually even the quietest of kids will be comfortable to say anything and everything they would like to.”

An anonymous Valencia High School student recounted her experience with bullying and how Ms. Richardson helped her find a new outlook on life.

“I was never a thin girl; the name calling and remarks about my weight have afflicted me since grade school. All throughout my academic career, someone felt a need to comment about how fat I looked that day or how much I was eating during lunch. I received so many harassing questions on anonymous question and answer websites. These nameless attacks hurt even more because I had no idea who would be saying what. I couldn’t find the motivation to do well at school or really anything for that matter.”

She continued, “After I started to fail nearly every single one of my classes, my counselor recommended that I see Lauren. I could tell her anything and everything and she wouldn’t scrutinize me. I was able to come to terms with my image and feel so much more confident about myself.”

“Regardless of what may happen to them I want my kids to understand that they are not alone and getting help will empower them,” said Richardson. “Finding a support system will not only raise self-esteem but also a sense of security.”

Bullying is a terrible, yet widespread action. It is impossible to pinpoint the exact causes of bullying, and idealistic to believe that bullying will disappear. However, by diverting our attention to both the aggressors and the victims, attempting to help resolve their issues and treat the hurt, we can try to save both bullies and their victims.