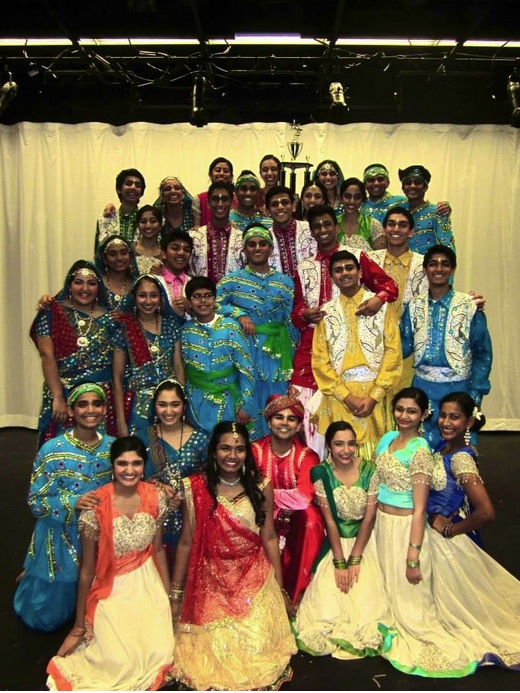 Students at Whitney High School, a public school in Cerritos for grades seven through 12, live within a community that many teachers and students describe as the “Whitney Bubble.” This term reflects the opinion that Whitney shelters its students and does not prepare them for life after high school. Yet one student group, the Shanti Club, is showcasing the school’s diversity and giving students a chance to learn about other cultures.

A selective school, with a total enrollment of 1,021 students chosen after an evaluation of their California Standards Test score and a writing assessment, Whitney has been awarded the 21st Century National Blue Ribbon School of Excellence Award in 1987, 1991, 2008, and 2011. Thanks to the school’s honors, many people have migrated to the ABC Unified School District in the past years – the majority of whom are of East Asian descent. Whitney’s 2013 to 2014 school year profile shows a student population that is almost 55% East Asian.

Whitney proclaims in its vision statement that it “strives to develop intrinsically motivated, collaborative learners who approach their education purposefully and creatively by taking ownership of their learning to become responsible, innovative global citizens.” Yet, for a high school that strives to create global citizens, some have asked if having a mostly Asian population limits the students’ capacities after high school.

JSR explored this question in a survey of 187 Whitney students, asking, “Do you think Whitney prepares you to face people of different cultures and backgrounds after high school?” Approximately 72% of the students who participated in the study said “No” and 28% said “Yes.”

These results show that Whitney’s predominantly Asian population can be a potential issue for the student community.

Jessica Park, from Whitney’s Class of 2012, took a break between her last year at Whitney and her first year and is now a freshman at the University of California in Santa Barbara. She stated in an interview with JSR, “Whitney gave me a great scope on the importance of college and the benefits that come from excelling in such an environment, but at the same time left me in a very comfortable, sheltered zone [with] a very tunnel-minded ideal that I would succeed if and only if I went to college.”

It appears that some students, like Park, feel as if Whitney pushed them into a mold and ended up making them less adaptable in life after high school. According to Park, Whitney has also impacted her social life in college.

“Interaction within communities of different races is really contingent on the individual,” she said. “I have a very diverse community of friends in college, but I do find myself being more drawn to having a familiar, Asian demographic of close friends.”

Having less exposure to other groups in high school may be a cause behind this. Thus, Whitney is in need of openness to many different cultures.

Yet things are changing at the school, at least in the way that it acknowledges its diversity. After years of grouping East Asians with Indian Asians, Whitney’s school profile for the 2013 to 2014 school year is different from previous years’ profiles because it lists these groups as separate and identifies about 15.5% of the student body as Asian Indian.

When interviewed about the reason for the school profile change, Whitney High School’s principal, Dr. Rhonda Buss explained, “We simply classified them as two separate groups because we felt that they had different cultures.”

The campus’ Indian culture club, known as Shanti Club, is helping to burst the “Whitney Bubble” and showcase this diversity by hosting a Culture Show every spring. The night consists of diverse Indian cultural dances with both traditional and contemporary “Bollywood” characteristics. The culture show is not only telling of Indian culture, but is also beneficial as the organizers donate the night’s profits to a charity.

The Shanti Club Culture Show is famous for being one of the only cultural events that features the participation of a significant amount of students from different cultures and grades. It also includes a special act for teachers to showcase their Indian dancing skills. By placing so many people of different backgrounds together, the Culture Show creates a comfortable atmosphere for students to break out of their comfort zones. This direct interaction with Indian culture invites high school students to learn and to become more enthusiastic in delving deeper into the culture of their peers.

Analis Martin performed in last year’s Class of 2016 Culture Show Act. In an interview with JSR, she said that she believes the show succeeds in unifying students.

According to Martin, “I learned a lot about Indian culture through this event from eating the food, wearing the clothes for the event, and talking with my Indian friends about their families.”

Another performer from the previous year’s Culture Show is Namita Shah. Even though it was her first year at Whitney, she bravely joined Culture Show as a seventh grader, “In a school like Whitney that is full of [East] Asians, Culture Show has helped me connect with my Indian roots. Indian dancing has been a huge part of my life since I was five years old, so Culture Show is a great way for me to continue dancing.”

Shah shared her opinion on the diversity displayed during the show.

“I think it’s great that non-Indian people like to participate in Culture Show and are having fun doing that,” she told JSR. “I personally enjoy experiencing other cultures and love seeing others enjoy different cultures. Culture Show is such a great way to bond with people!”

Currently an eighth grader, Shah will be in the show again this year.

Shikha Badlani, a sophomore and co-Director of the Culture Show, said of the many non-Indian participants, “We completely love the fact that Culture Show is attracting so many non-Indians. We want everyone to learn more about Indian culture, whether it they are just watching the show or are performing in it.”

“It means that our future shows will just consist of a lot more diversity,” she said, “and it’ll allow us to expand our abilities… Getting more and more people involved is exactly what we strive for so it makes us happy to see the growth in that.”

Kevin Harp, an AP US History teacher at Whitney and the advisor for Shanti Club, told JSR, “It kind of exposes [students] to a culture that if they didn’t participate, they wouldn’t really know about.”

Harp believes that school clubs are parallel to the real world, “It’s fantastic that all our culture clubs have pride, but I also want them to understand the global community kind of aspect this school has and that the real world has.”

Thus, the Shanti Club’s Culture Show helps with the overall global awareness within Whitney by exposing students to new experiences. These kind of events help Whitney progress towards its vision of creating global citizens. Though students believe that Whitney shelter them by creating a bubble of mainly East Asians, events like the Culture Show expose its students to other cultures and give Indians an opportunity to show their pride in their culture.

This year’s Culture Show will be held on May 31 in the Whitney High School MAC Auditorium. Everyone is welcome, so go support the courageous Whitney students and faculty as they showcase their Indian dance moves!

For a preview, watch this video of the Shanti Club during the 2013 Talent Show taken by audience member Pranev Shah: