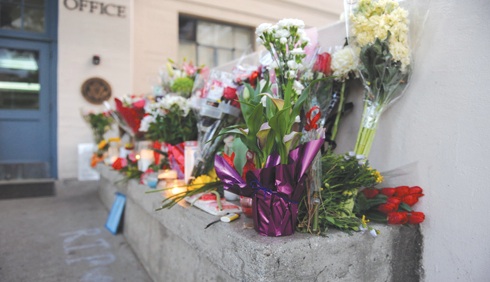 The towns of La Crescenta and La Cañada have been devastated due to on-campus teenage suicides in the last two years.

In February 2012, Drew Ferraro, a 15-year-old sophomore at Crescenta Valley High School (CVHS), jumped off a three-story building and fell to his death. In March 2013, 17-year-old Campbell Taylor, a La Cañada High School (LCHS) senior, similarly jumped from a building and died. The suicides shocked these communities and left them in emotional distress.

Drew Ferraro is remembered to be a great athlete with a sweet smile and giggle, a good-natured kid who loved to play jokes on his family and fill those around him with laughter.

In an interview with JSR, classmate Samuel Shin said, “I remembered Drew as a pretty happy guy . . . It’s pretty hard to imagine why he had to lead his life towards that direction.”

His friends reported that his suicide was most likely a result of the bullying he experienced, despite the opinions of the authorities. Drew was bullied due to his “small size, demeanor and style . . . and his attitude towards girls,” according to a lawsuit his parents filed against CVHS.

Campbell Taylor was an ambitious senior who was actively involved in the theater and school newspaper. He was eager to move up the ranks of the editorial staff and wanted to go to school in Sacramento after graduating, showing an interest in becoming an officer in the military reserves.

Many were shocked when this energetic and enthusiastic teen passed away. After the news of his death, many brought flowers and commemorated Campbell by bringing in flowers and praying for him on the La Canada High School sign located near the front office.

Schools Respond with Programs and Confidence-Boosters

Unfortunately, these incidents not only affect the friends and families of the victims but other individuals in these communities. The witnesses to the horrific incidents were traumatized and deeply affected. Counselors at both high schools provided support to students by opening their offices to talk to those who were incredibly shocked by the incident.

At La Cañada High School, programs such as Challenge Day have been implemented. Challenge Day is an anti-bullying motivational program that claims on its website to “provide youth and their communities with experiential programs that demonstrate the possibility of love and connection through the celebration of diversity, truth, and full expression.”

During Challenge Day, students do not go to class and instead go to the gym along with faculty members. Teachers are grouped with five to six students to form a small group. The first half of the event requires some physical activity, such as running. However, the atmosphere gets a lot more serious and emotional after these initial icebreakers as students explore their true selves, discuss ways to express themselves, and are challenged to “live a life in the service of others.”

“Even though it was an emotional part of the day, I felt extremely comfortable with my small family group and felt a sense of relief knowing that I’m not the only one with the burden of my own feelings any longer,” stated Lauren Lee, a sophomore at LCHS, in an interview with JSR. “I cried a bit,” she continued with a laugh.

Candyce Ha, a junior from LCHS, said, “The fact that we didn’t know most of the people but bonded together as a family within a couple hours was an incredible thing. It was wonderful to see everyone open up about their lives”.
After Ferraro’s death, Crescenta Valley High School’s Associated Student Body resolved to place Post-it notes with “You Are Loved” written on them on the lockers of the entire student body every Valentines Day. Soon after Campbell’s death, La Cañada’s ASB started to do the same in order to create a more loving environment in the school.

Students at both high schools also created “Compliments” pages on Facebook, to which students can anonymously message positive comments about a certain person at school. The owner of the page then posts the comments on the page so that the mentioned individuals can see them.

Students Regard Efforts as Ineffective

Many responses from the survey mentioned Challenge Day, counseling, and efforts by clubs. Yet just as many respondents said their communities were doing nothing. Some of these students felt that the schools in each community were more interested in test scores than in the emotional and mental health of those students taking the tests. Others weren’t sure what could be done.

One response stated, “My school has offered psychological therapy sessions and they encourage students to reach out to an adult for help, but honestly, I don’t think it’s very effective. Teenagers just don’t like talking about their weaknesses and it’s hard to open up on sensitive topics.”

It is clear from the survey, however, that students feel that schools must not only focus on their students’ grades or SAT scores, but also on their emotional stability. Therefore, in order to create a society that actively combats negative energy with positive energy, the community must take more action to ensure the mental and emotional health of its teens.