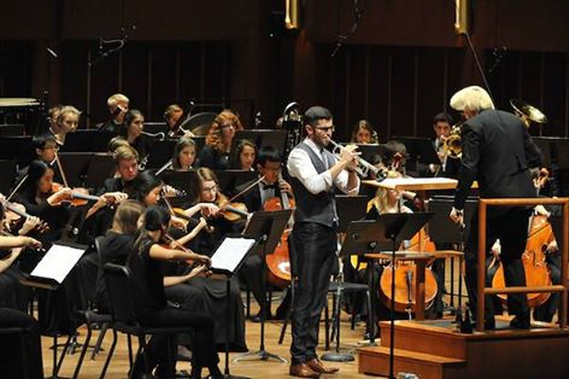 The Honor Orchestra of America (HOOA) performed at the Hilbert Circle Theater in Indianapolis, Indiana on Friday, March 13 and Saturday, March 14 as part of the Music for All National Festival. Students from 21 US states flew to Indianapolis to rehearse difficult pieces, such as Ottorino Respighi’s Roman Festivals and Alexander Arutiunian’s Trumpet Concerto, for four days under the baton of maestro Franz Anton Krager of the University of Houston’s Moores School of Music.

“Going to Indiana really [expanded] my experiences with orchestras because the level of everyone there is so high and it really shows you how much talent there is in the country,” Julia Zhong, a sophomore violinist from Hunter College High School in New York, told JSR.

“I made so many new friends there,” Zhong continued. “The conductors were really passionate about music and really know what they’re doing so it’s different than what I get at my school orchestra.”

HOOA was only a small part of the Music for All National Festival, which also featured different orchestras, chamber groups, bands, and percussion ensembles from across the nation. Created in 1976, the Music for All organization promotes music education nationwide and has worked to provide life-changing experiences through music making.

“I really like the motive behind the orchestra and the festival because I believe that music in schools helps kids learn in the classroom by stimulating their minds in ways that traditional teaching doesn’t,” said William Jeang, a junior violinist at Clear Lake High School in Houston, Texas, when interviewed by JSR.

Jeang added, “Music allows for kids to broaden their interests and provides them with opportunities to meet new people.”

There are many benefits to music education. According to the Denver Post, studies have shown that drama, learning to play an instrument, and music theory classes impact the ways children learn and acquire knowledge. Kids who have been exposed to musical studies are shown to be able to do better on their academic tests than those who have not been exposed to music education.

Music education not only improves performance in academics, but also provides new experiences. A life with music can lead to new friends, information, and knowledge.