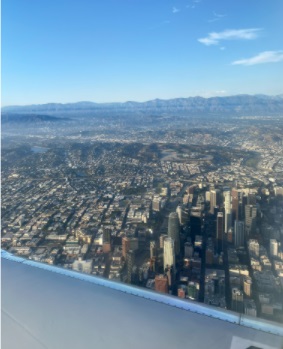 Flying during a pandemic and as an unaccompanied minor is something that is foreign to many people. As someone who has flown with my family before, flying on my own was very different. Not only was it my first time flying by myself, but it was the first 30 minute flight I had ever been on, and it was also my first time ever flying to Yosemite International Airport.

For my first alone flight, I flew out of LAX, Los Angeles International Airport, to FAT, Fresno Air Terminal. When I arrived at LAX I called and checked in with my parents, and had to go through security by myself. The line was nonexistent even at LAX because of it being such a short domestic flight. Something that I had not realized prior to this flight, was that commercial airplanes could be quite small. The airplane that I was on for both my flight to Fresno and back, was only about 13 rows with 4 seats in each, seating about 50 people. The airport and airline had multiple COVID-19 policies in place to prevent the spread of the virus, and, although there was no social distancing, the airline and airport sanitized all surfaces including the seats. When I was flying out of FAT, the flight attendant on board handed out disinfectant wipes for everyone to wipe down the surfaces around them.

My experience flying as an unaccompanied minor was not as nerve-wracking as I had expected it to be (especially with COVID). I felt extremely safe flying on my own for the first time because of the precautions that the airline and airport took to ensure my safety and the safety of others.