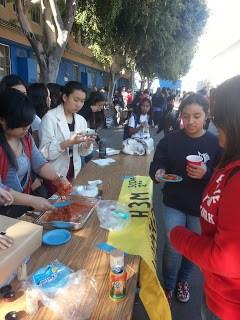 Helpers for Miracle Marrow Matches (H3M), a school club at the Los Angeles Center for Enriched Studies (LACES), is expanding this year under the leadership of new club President Chae Hyun Chelsea Kim.

Dedicated to helping patients suffering from leukemia and other blood-related diseases to successfully find bone marrow donors, the club was originally founded in 2010 by Ruby Kim, who is now a student at Pomona College. The club has focused mainly on awareness campaigns and fundraising to support the cause, holding monthly garage sales and recycling drives as well as fundraising at school carnivals to raise money for patients who require bone marrow transplants. In addition, H3M has released several videos on Youtube to educate people about becoming marrow donors.

For the 2013-14 school year, Vice President Jasmin Jin says the club will work to incorporate a more local approach on the issue.

“We are going to try to focus more inwardly in our own schools, our neighborhoods, our own community,” said Jin in an interview with J Student Reporters. “We are going to organize more informational sessions at school and recruit younger members, motivate LACES students to participate in events and hold more donor drives at a variety of locations.”

The club members now have to take an online educational course to learn the process of registering marrow donors and answering their questions.

“Educating our community is the basis of this club. We, as members of the club, must be knowledgeable in all aspects of the issue to truly inspire others to join us in our campaign,” says H3M treasurer Yeonsoo Shin.

This is only one of President Kim’s goals.

“We want to expand H3M to different grades, different ethnicities, and different kinds of people,” she said. “By creating a more diverse and welcoming environment, people will feel more affinity toward the issue.”

So far, membership is growing and the club is optimistic that the school year will be successful. Already, they’ve held several donor drives and an Oct. 5 silent auction in Downtown LA.