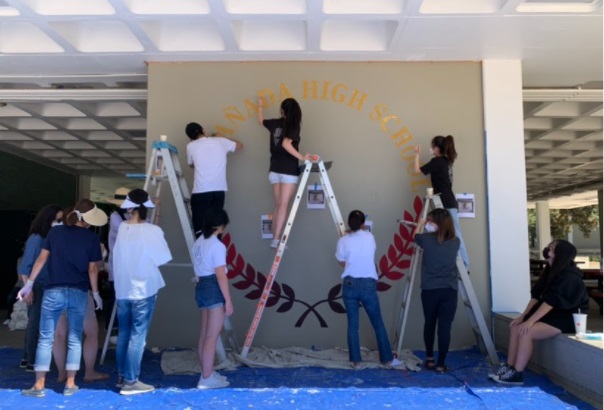 School is out and summer has begun! Heartshare, a non-profit organization founded by a group of high school students in La Crescenta, California, decided to design and paint a mural for La Canada High School in preparation for the reopening of high schools in the fall. Heartshare has already painted several murals around the community, including other schools such as Crescenta Valley High School, Burbank High School, Valley View Elementary, and more! Heartshare aims to instill volunteerism and beautify the community by inspiring young artists to collaborate and share their art during the mural process.

Heartshare members gathered on June 12 and 13 to adorn a high school. Members decided to create a brand new mural for La Canada High School that would feature the school‘s mascot, the Spartan. On the Saturday of the mural painting, approximately 10 participants, along with a couple of adults, arrived bright and early, at nearly 7 a.m., to help prepare. The group had to paint the primer first, then they painted the base color of the wall. While a couple of volunteers were busy with these tasks, others began to retouch nearby dirty and marked walls. After the primer dried, the group hung the stencil that would be used to make the border, which had been made at an earlier time, and started sketching out the design. Every member had a job, whether it was mixing paint, painting on the wall, or holding the ladders for the other students’ safety. Everyone worked hard until around 6 p.m. on the first day, meaning that they had worked nearly10 hours! During that time, all of the base work had been finished, as well as the border around the mascot, and it was only the first day!

On the second day, members of HeartShare arrived at 6 a.m. to help sketch out the mascot. Because the group didn’t use a stencil for the main logo, it was a little tricky, as they were creating it by hand. The group worked hard to make sure that the mascot was flawless, and even though difficult, it turned out great! Later, after the sketching was complete, the rest of the group arrived and began painting the mascot. The mural was completed around 3 p.m., and everyone was then able to see what came from their hard work. The group members put in a lot of effort, and the results were fantastic. As part of the group, I can say we are delighted to be able to contribute to the embellishment of our community and look forward to more projects in the future.