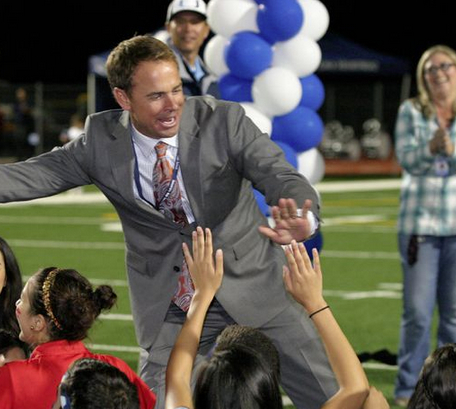 On Oct. 11, the football teams of University High School (UHS) stadium and Woodbridge High School (WHS) met for their first game at the new football stadium shared by the two Orange County schools.

The plan to build a new football stadium stated in 1987, 17 years after UHS opened. On Sep. 6, after 25 years of meetings and votes followed by almost one year of construction, the University High stadium became the second high school stadium in the Irvine Unified School Districts.

At halftime, the members of UHS and WHS Associated Student Body (ASB) held a stadium dedication ceremony. The students united, cheered and hugged on the football field to welcome and show their appreciation to former and current IUSD members, Irvine Unified Board of Education, UHS and WHS administrators and other local dignitaries including Irvine mayor Steven Choi. After speeches by administrators, IUSD superintendent Terry Walker handed a commemorative placard to UHS ASB President Hunter Craft and WHS ASB President Hannah O’Connor.

Steven Veshkini, UHS Senior Council member, said, “So many people went, so all the seats were filled up. Throughout the night, the spirit we had was incredible and infinite! I feel really blessed to have the stadium for my senior year because it’s such an astounding feature to our community and school.”

The WHS Warriors won 51 to 16, but fans from both schools cheered throughout the game.