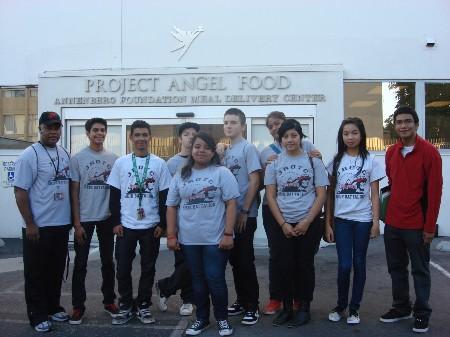 According to Master Sergeant Herbert Harris, a 22-year-old United States Army veteran and the Senior Army Instructor at Hollywood High School, the mission of the Junior Reserve Officers’ Training Corps (JROTC) is to mold students into highly motivated individuals who strive for success.

Cadets meet during and after school on campus. Although the rules can be strict, the cadets feel that the training benefits them. They learn about dedication, teamwork and leadership.

“When I first joined JROTC, I had a hard time following all of the rules. Now that I am a junior, I understand that these rules have made me a better person,” explained Cadet Battalion Commander Eddy Jimenez.

Master Sergeant Harris also stresses the importance of serving the community. He encourages his cadets to take part in programs such as Project Angel Food, a volunteer service that provides food for those suffering from HIV/AIDS, cancer or other serious ailments.

A common misconception held by many high school students regarding JROTC is that cadets must join a U.S. military branch upon graduation. Master Sergeant Harris, however, asserts that this notion is a fallacy.

“JROTC is for every student who wants to be motivated and develop confidence. It’s not only for those who wish to pursue a military career. We do not influence cadets to pursue a military career after graduation. Should they wish to join the military, it is a voluntary decision that is made by the cadet and the cadet’s family, not by my staff or by me,” said Master Sergeant Harris.

Although sometimes mocked and ridiculed as “outcasts” or “wannabe soldiers” by their peers, the cadets of Hollywood High School’s JROTC program stand proud and resolute.

“I am proud of who I have become, thanks to Master Sergeant Harris. We are like family, and do everything we can to support each other,” said Cadet Command Sergeant Major Erick Avila.