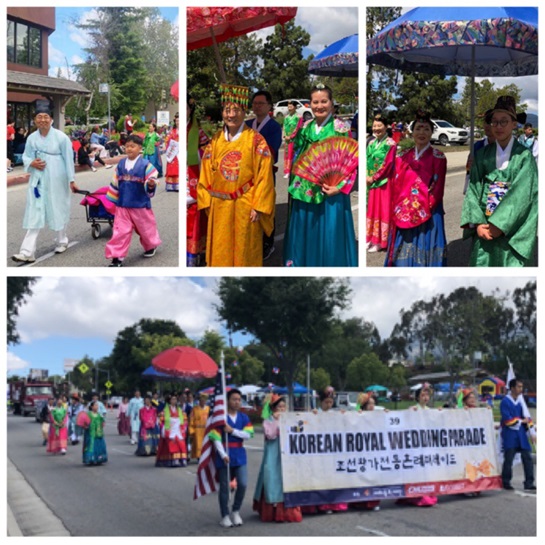 The 46th Annual Fiesta Days Memorial Parade took place on May 27, 2019 in downtown La Cañada Flintridge. Many organizations and parade participants walked the route or rode in vehicles for about a mile on Foothill Blvd between Loma Vista and Commonwealth. Many people came out in honor of Memorial Day and to support all those who were participating in the parade.

Representatives from local organizations in surrounding communities gathered to make their voices heard for a variety of causes, not all of which were specifically related to Memorial Day. Groups marching that day included local high school bands, a Kiwanis chapter, area baseball teams, and many other service and entertainment associations. All of these organizations wanted to be represented as well as honor American service people in a respectful manner fitting for this national holiday.

I arrived at 9am to march with the Korean American Federation of North Los Angeles, who seek to educate and advocate for the interests and voices of the Korean American community. I started off by wearing all of my traditional Korean clothes and preparing for my role as the “Royal Prince”. This year, our parade performance depicted a traditional Korean marriage. Although the performance was not directly related to the conventional celebration of veterans on Memorial Day, it still memorialized a central aspect of Korean heritage, a culture which many in the US Armed Forces experienced firsthand during the Korean War of 1950-1953.

Memorial Day is an American traditional holiday that is observed on the last Monday of May, honoring the men and women who died while serving in the US military. It is not exactly known how this holiday was created, but the US Congress officially passed a law in 1971 that made Memorial Day an official federal holiday. On Memorial Day many citizens across the US take time to remember and honor all of the servicemen and servicewomen who have served our country.