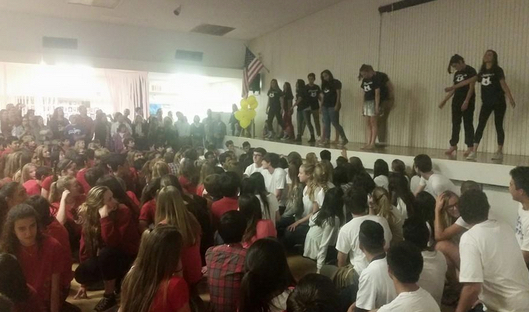 Learning a second language is hard, and many students struggle in their foreign language classes because their native English is significantly different than most other languages in style, grammar, and pronunciation. To make learning more enjoyable, the language department held a foreign language fair at the Open House night on April 9. All language classes, such as French, Spanish, Korean, German, and Chinese, came up with booths and performances to incorporate each culture’s characteristics.

The French classes danced with the songs of Stromae, a famous contemporary Belgian singer who writes songs that criticize social injustice.

Mademoiselle Sadler, a French teacher and a director of the show, told JSR, “Before I teach how to dance along the songs, our classes spend some time interpreting lyrics of the songs so that we can learn French in fun way.”

She added, “Learning a foreign language can be stressful to students, but if we find interesting sources… to approach other countries’ cultures and languages, learning can be much easier and fun to our students. It has nothing to do with grammar and tests and exams, but actually learning the language for the love of learning. The kids are wanting to learn [Stromae’s] lyrics because they know when they listen there’s a deeper meaning.”

Rachel Lee, a sophomore who takes French at LCHS, danced at the Open House night and told JSR, “It was meaningful to all students. All of the French classes could participate in one event and introduce French music and culture to the parents and other students in different language classes. ”

Sadler recently had an interview with the Outlook, a local newspaper, in which she explained her experience at Stromae’s concert with French students at Club Nokia. She is also planning to have a trip to Paris over the summer with French students that will immerse them in French culture.

It is always hard to get used to new things such as new classes, new friends, and new languages. However, we can be familiar with them when we have fun and enjoy them with more positive attitudes.

Sunhyoung Park is a new JSR student and an 11th grader at La Cañada High School.