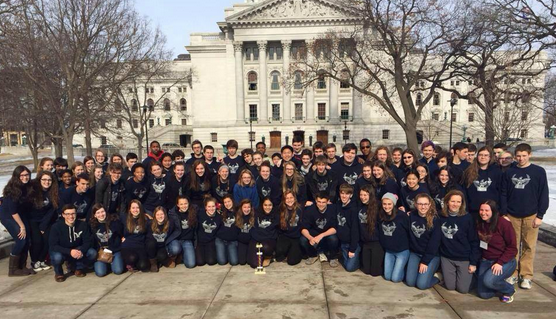 From January 29-31, over 500 high school students shared their love of Latin at the Wisconsin Junior Classical League’s (WJCL) Latin Convention in Madison.

Gathering in the Inn on the Park Hotel in the shadow of Wisconsin’s capitol building, students from across the state traveled long hours to celebrate and reaffirm their love for the classics. From a spirited pep rally on Thursday night, to fierce Certamen matches on Friday afternoon, to tearful and heartfelt goodbyes on Saturday, the convention was filled with joy and happiness between fellow Latin students.

Students and teachers alike lauded the WJCL and this year’s convention, during which students had the chance to explore Roman history and culture at venues including UW-Madison’s campus.

Clare Hanson, the Latin Club public representative of Mequon’s Homestead High School, told JSR, “The sense of community you feel right when you walk in is incredible. Everyone is so nice and welcoming. It’s a place where you can be confident in yourself.”

Marianne Wallach, who as Homestead’s Latin teacher is the architect of the largest Latin program in Wisconsin, stated, “The spirit was amazing this past year… It was very inspiring… I was taken aback… It makes me want to get up every day and come [teach]. It energizes the whole program.”

For those who choose to take full advantage of the opportunities for students, the schedule can be grueling. Some of the events offered at convention were an impromptu art competition, an impromptu essay, an impromptu oratory selection, twelve timed tests, a memorized oratory recitation, Certamen, a war machine contest, a chess tournament, a dance, and myriad art competitions including sculpting and scrapbooking.

The most popular event, Certamen, is a Latin trivia game in which three teams of four compete. At the convention, there were tournaments for four different levels of junior Latin, both competitive and open, and an additional tournament for adults. Wallach coached a Homestead team comprised of Rachel Chavin, Clare Hansen, David Giersch, and Ansley Laev to a state title last year.

However, this convention is about much more than just fun and games; it is a testament to the power of the classics and a rallying cry to study the language which resonates in Western culture to this day.

Said Wallach, “The classics are embedded in every facet of our Western civilization: the architecture, our democracy, our art, our medicine, our language. [They are] so woven into our lives that people are just not aware of how much we are a part of the amazing world of the classics.”

The convention shows that Latin is not a “dead” language; rather, it is still very much alive. In listening to these students talk about why they chose such an ancient language, one cannot help but hear the passion in their voices.

Rachel Chavin, Homestead’s Latin Club secretary, said, “I started taking Latin because I… wanted to take something that would challenge me… [and provide] something different.”

Latin is an exciting subject for these 500 students, and, for a weekend, they shared their passions with each other.