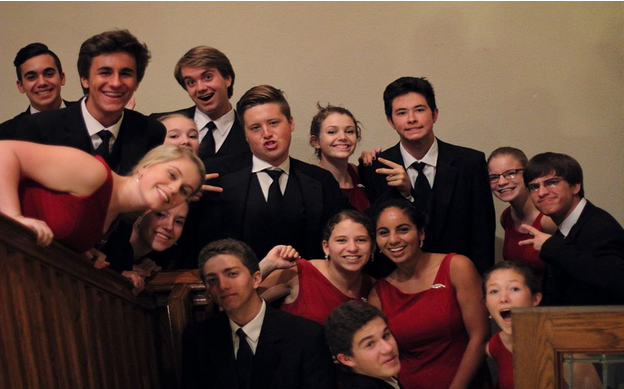 On Friday, October 17, the Choral Department of La Cañada High School (LCHS) held its annual Pops Concert fundraiser to raise money for scholarships to help students go on a March 2015 trip to Spain.

The concert consisted primarily of solos and duets from students in the Chamber Singers, Concert Choir, and Women’s and Men’s Ensembles. The singers were backed by live student accompanists who played piano, guitar, and drums.

Senior Adam Oler, one of the performers, said, “I thought the pops concert went amazingly. There were so many good acts and it helped fundraise a lot of money for our Spain tour.”

Junior Abby Rosen, also a performer, told JSR, “ It’s always a little tricky because… there really isn’t any class time we can use to practice. Duets and group numbers are especially difficult because you have to find time outside of class that works for everyone to rehearse.”

“I’m so glad I got to do a duet with [fellow student] Gabby Giancola,” Rosen said. “She’s always on top of things and very flexible. Being able to go out there knowing that your partner has your back is such a great feeling!”

Junior Soo Hyun Han said, “I think that this Pops Concert… was really a great one. I got to hear all the talented kids within the LCHS choral program, and it’s really meaningful because I can truly appreciate the program that I’m in.”

Han is currently in Chamber Singers, and told JSR that although the thought of standing in front of a large audience scares her, the energy and motivation she got from this Pops Concert has driven her hope to sing a solo in the future.

The performance looked and sounded very professional. Many members of the audience enjoyed it overall, and throughout the concert both adults and students smiled as they shook and moved their heads to the beat of the songs. According to Oler, it raised $3,000 for the Spain trip.

“I am kind of sad it’s already over,” Oler told JSR, “because it was nice to hear certain peoples voices that you wouldn’t normally hear in a choir setting and it also helped bring people closer. I can’t wait for the rest of the year and for the pops concert at the end of the year.”