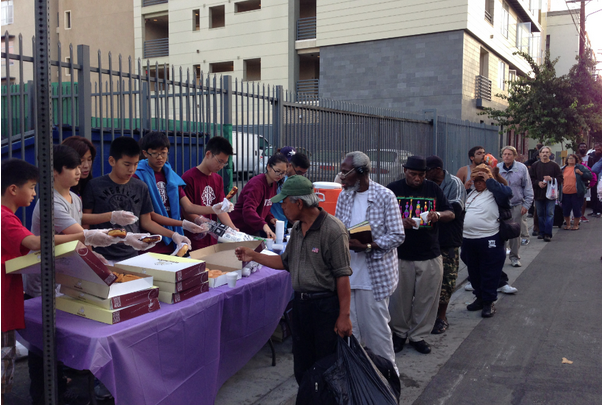 The monthly event was over in less than an hour, but in that time period the volunteers distributed over 200 donuts and cups of coffee. Members of the youth volunteer program worked alongside their Lions Club mentors in the brisk morning air, attracting a line of eager guests stretching around the block.

Although the food was free of charge, many people felt that a warm word of thanks was not enough.

“I really hope that these wonderful people [feel] blessed by my music and my prayers,” says Jay Sanders, who sang hymns and said a prayer while standing in line for his coffee and donut, “[they] have been touched by the goodness and love of God, and I want the whole world to hear.”

Many of the students were taken aback by the sheer number of people on the streets, as well as the wide variety of people they encountered.

“Many of these people don’t fit the traditional stereotype of homeless people, and many of them look like average folks walking down the street,” stated Dahee Roh, a sophomore at Bravo High School and volunteer, “it was humbling to see the appreciation and gratitude they showed us for such small things.”

Others felt motivated to do even more to help the less fortunate.

“I used to think waking up [this] early to come volunteer was enough,” says Kenneth Cho, another volunteer, “but now, I don’t think it’s enough. I want to make a bigger difference.”

The Los Angeles Wilshire Leo Club gives back to the community monthly and aims to spread the Club tenets of leadership and good citizenship. In addition to serving breakfast to the needy, club members participate in neighborhood and beach cleanups, sponsor local health clinics and volunteer at various local events. Interested middle and high school students should send an inquiry to lawilshirelions@gmail.com.