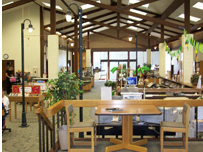 The number of tutoring sessions in Canyon Hills library in Anaheim Hills has been increasing over the past several years. Despite the availability of other areas, such as small cafes or houses, the library ranked as the best place for tutoring by students, teachers, and parents.

In an unscientific JSR survey taken of high school students who have tutored or been tutored before, results showed that the most popular reason for choosing libraries was convenience of location. They were built so that they would be at the center of all numerous different neighborhoods and schools.

“We’re only students, and a majority of us can’t afford to waste time going to a further designated area to study,” stated Kevin Xie, a junior at Canyon High School. “That library is a three-minute walk away from school, [which is] a pretty time-saving distance.”

Another cited reason was the “studious environment” that other places don’t provide.

“When I started out tutoring, I thought Starbucks would be good because it’s a popular place among teenagers,” said Ana Lee, a college student. “But after two or three sessions, the place just got too crowded and loud.”

In addition to the environment, libraries can provide students and tutors with other resources, like plenty of workspace and computers.