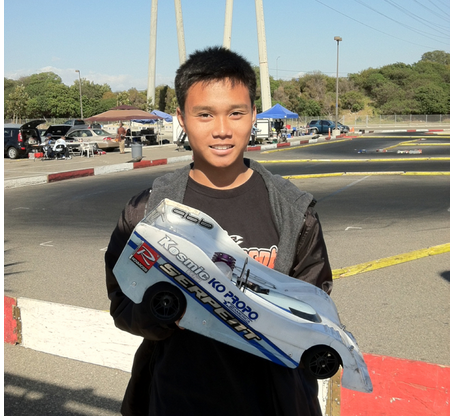 For Brandon Cho, radio-controlled (RC) racing provides “an adrenaline rush like no other.” One of only three teenage drivers in the Greater Los Angeles Radio Controlled Racing Club (GLARCRC), Cho has competed in numerous races and already has ten trophies as well as five wins.

Though he is still relatively new to the sport, the Beckman High student has progressed by leaps and bounds, even going as far as becoming the youngest team driver for Serpent America, a major and well-respected company within the RC community. Cho has also competed on the professional level, competing in the 2012 Nationals and qualifying for the 2013 Nationals.

“Competition in the GLARCRC really is [tough]… so I feel really accomplished that I’ve even come this far,” Cho says.

Cho was first reluctantly exposed to RC racing by his father, also a member of the GLARCRC, but has since discovered his own passion for it.

“To be honest, when I first started racing, I really didn’t like it at all,” Cho said. “My dad kept on pushing me and pushing me, but somewhere down the line, the spark ignited and everything just took off. Just going out there and showing what I can do really makes me happy and gives me a sense of pride… [to have] put in the time, sacrifice and effort needed to succeed.”

“Racing isn’t just a sport to me,” Cho said. “It really is a way of life. Getting up at the crack of dawn and racing my heart out is a life that I don’t mind living. Improving my profession and being able to showcase my unique sport is a great driving force for me to keep going.”