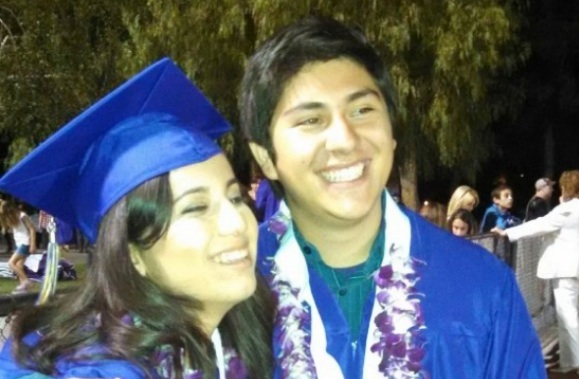 Andrew Reynoso, an 18-year-old who graduated in May from Valencia High School, died on June 18th, 2014 of injuries received in a car collision on San Francisquito Canyon Road. In light of the accident, loved ones and community members are contibuting to an account on the fundraising site GoFundMe.com that was set up to facilitate donations for the victim’s medical bills and funeral payments.

Reynoso was pronounced dead at Henry Mayo Newhall Hospital, where he was transported after his car collided with the vehicle of Cynthia M. Sheldon, 43, who suffered minor injuries.

“My little brother is dead. Our mother has not stopped crying… he had… his whole life in front of him,” said Jose Salcido, Reynoso’s brother, in an interview with the Santa Clarita Valley Signal.

The GoFundMe account, created by Reynoso’s girlfriend Elizabeth Cisneros, has the description, “Andrew’s cordial attitude and kind heart will forever be remembered by the people he touched. Everyone who had the opportunity to know Andrew is mourning over his short lived life.”

With 119 shares on various social networking sites, the account was able to raise $945 in three days. As of Tuesday, July 15, the fund was nearing its $2000 goal.

Messages of sadness and condolence have appeared online.

“Andrew Reynoso was a great guy…It’s sad to lose another person that I knew from Valencia and he was the nicest kid. Life is cruel man,” tweeted Twitter user @MikeTownsendd.

“Andrew was an amazing friend of mine and he will always be missed from the bottom of my heart. My prayers go out to his family and girlfriend. My family wishes that this will help with the expenses,” wrote Kimberly Mendoza in a message with her donation on GoFundMe.

“Rest in peace, Andrew… we all love and miss you very much,” wrote Deborah Gonzales, another community member.

Andrew’s death was unfortunately not the first traffic fatality suffered by a teenager in Santa Clarita this year. In January, the community gathered in support of Albert B. Castro, a senior from Bowman High School who was killed by a vehicle that collided with him as he skateboarded, and in March the community again came together to mourn the death of local teen Blake Cook. Both tragedies were covered by JSR.

In remembrance of all of the city’s youth lost in traffic collisions, Santa Clarita officials include the names of victims in the Youth Grove, a memorial in Central Park that commemorates those under the age of 24 who are lost to traffic accidents. These victims are honored annually on the Evening of Remembrance, a community event which will be held this year on Wednesday, Sept. 10.

If you are interested in contributing to the Andrew Reynoso GoFundMe account, you can do so at gofundme.com/ajfdik.