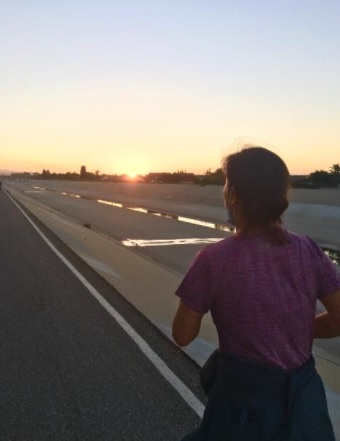 It was five am. Loud voices pierced into my ears. I opened my weary eyes to find it still dark. My mother had called me to wake up. This week, I began morning runs with a non-profit organization called Happy Runners. This group would run and stretch weekly in order to improve their running techniques and stay in shape.

When I entered the car to head out for my first run, the remnants of drowsiness left my body as after I sat on my frigid car seat and saw the blue-black sky. After ten minutes of driving, my mother and I arrived at our destination?Coyote Creek Bikeway. We came later than most runners, thus the trail was empty from our vantage point. My mother took the lead in our run, and I followed behind her. We moved at a slow pace and followed a calming breathing pattern. I was amazed by how much longer and farther I had run compared to my many mile runs at school. After some time, we saw runners trickling into our view. It was then that time I noticed most of the members were adults or seniors. I was in awe of how athletic they were, since I would often laze around at home for most of the day. My mother and I continued, and we eventually ran two miles?halfway done with our run. I felt my legs stiffen and my feet become numb, but the cool breeze and the sound of my music helped me push through and keep on running. Soon, we finally arrived back at our starting point and completed our four-mile run in a span of one hour.

Before I started my second run, we met with a few members to stretch. With the small group, we performed arm, leg, shoulder, and neck stretches to warm up our bodies. The group exchanged words of encouragement, and then began our run. My mother and I separated from the group since we wanted to focus on running instead of walking. On my second day, I ran faster and for a longer time than on my previous run. I even surpassed my mother and kept a great distance between us! My second run felt easier and a lot smoother than before; we ran six miles in a span of one hour and 30 minutes.

These morning runs were a special opportunity for me to shape up mentally and physically. My stamina and speed have increased and I now wake up refreshed every morning. Running early has allowed me to maximize my time and appreciate life’s little moments. If you are looking for a way to invigorate your day, I encourage you to join a group such as the Happy Runners; it can change your life.