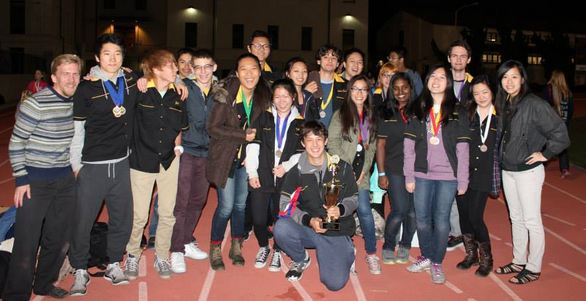 CyberPatriot Teams Azure and Silver qualified for Nationals in December and placed second and fifth, respectively, in the CyberPatriot National High School Cyber Defense competition on March 11-15 in Washington D.C. Under the wing of Coach Jay Gehringer, these two teams prepared for months, meeting after school and in their free time to get ready for the final competition.

Created by the Air Force Association, CyberPatriot is the premier national high school cyber defense competition that aims to educate students about cybersecurity and other topics in the Science, Technology Engineering, and Mathematics (STEM) disciplines. The teams are given six hours to detect cybersecurity vulnerabilities in a simulated computer operating system while solidifying the system.

“My experience in CyberPatriot this year was amazing,” Henry Birge-Lee of Team Azure told JSR. “Especially at the national finals, we were shown how valuable the skills we were learning were to industry and government.”

Team Silver, who qualified for State in the 2013-2014 school year, was thrilled to participate in the National Finals this year.

“The competition itself was very challenging and intense,” junior Annie Shim told JSR. “I had to do multiple things with very limited time… and space.”

“The most inspiring part of the competition, however, was getting the chance to meet very important people of this nation, including U.S. Senator Dianne Feinstein, Secretary of Education Arne Duncan… [and more]. These inspiring people had the experience and were able to give me real-life advice,” Shim concluded.

Team captain Christopher Lung described his experience to JSR, saying, “I love the atmosphere that surrounds Sci Oly, as well as the love for science and competition which creates a great learning environment for everyone.”

Science Olympiad members dedicate hours after school to studying their respective events and preparing to reach their full potential at the Southern California State Science Olympiad. North Hollywood placed seventh place in preliminary results from that tournament, which was held on April 4.

Another science competition is Science Bowl, which consists of a series of fast-paced jeopardy-like questions that test the students’ knowledge of all topics in science. North Hollywood’s Science Bowl A-Team became 2015 Regional Champions on February 21. The school’s B-Team came close behind, taking third place in the National Science Bowl regional competition.

The two teams spent hours after school preparing for this competition. The five members of A-team were pleased to see that their hard work paid off, as they went from second place last year to first this year.

“Our Science Bowl team definitely improved from last year. Everyone learned from their past mistakes, studied much more, and widened their gaps,” A-Team member Joshua Kim told JSR.

“My expectations for next year,” he continued, “are to work, if not harder, just as hard as this year and train our underclassmen and new members well for subsequent years.”

Other NHHS academic teams have also performed excellently. The Robotics Team placed 6th in the state, and the Academic Decathlon Team placed in the top half of competing schools statewide. State finalists on the Speech and Debate team are currently preparing for their state tournament later this month.