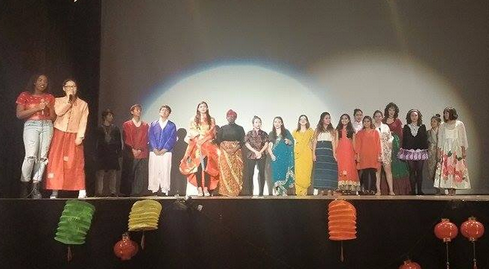 One event, a fashion show, included a total of 13 teams representing 12 countries. Every team displayed their traditional garments, coordinating each part of the fashion show with traditional music.

NHHS sophomore Joonsung Kim, a Korean model in the show, told JSR, “I [am] extremely blessed to live in a place where I can meet people of all cultures. The fashion show allowed me to see the various styles of clothing from all around the world along with a brief insight into their country.”

“Participating in the multicultural fashion show was a rare opportunity to display what surrounds me and is part of my life into my high school community,” said Simi Verma, NHHS’ vice president.

She continued, “I thought it was really great to see students participating and learning more about their own cultures and other different cultures because they had a chance to represent themselves in an exciting, non-school report manner. I was able to wear clothes that many people didn’t know about. Providing traditional music was my favorite part of the experience because I was able to share my country’s songs with the rest of the school.”

Ms. Parker, an NHHS teacher who participated as a teacher model, told JSR, “I liked the part of everybody showing the special parts of their culture. I liked the multicultural aspect of enduring the black history because a lot of students felt left out.”

During the multicultural assembly, students from different ethnicities performed traditional dances and songs, uniting everyone in an atmosphere of learning, understanding and increased awareness. Witnessing this unity helped the students come to the realization that even though America is made up of different cultures, it is one country, like a beautiful mosaic made up of different parts.

America is a truly multicultural society in which different cultures have learned to coexist with one another. The so-called “melting pot” is a phenomenon that exists not only in Los Angeles but across the entire country.

According to Kim, “A benefit of a multicultural society is that it teaches people how to be tolerant, as well as to learn and experience new things such as food.”

To sustain this mix of different cultures, however, it is important to get to know other cultures so that we can understand them and help each other through differences. This need to raise cultural awareness and embrace differences is the reason why schools like NHHS, and the communities around them, hold multicultural events.

All in all, NHHS’ events were both educational for students and parents as well as the surrounding community. Hopefully, events like this will linger in the minds of people in the community and help foster more understanding and a tolerance of differences.