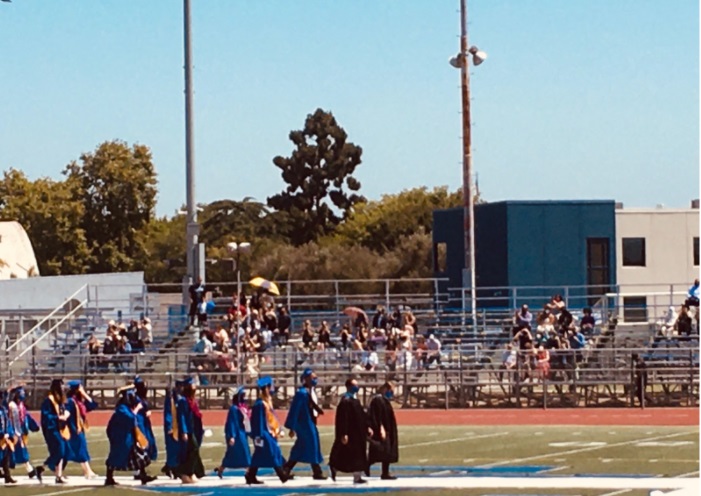 Graduation was windy. Leading the procession to the time-honored strains of Pomp and Circumstance, down through the rows of plastic white chairs spanning the football field, my foremost concern wasn’t the fact that I was finally graduating high school, but rather that my cap and tassel – so carefully perched atop my head hours before – would fly right off into the bleachers. In the official graduation video filmed by my school, I’m seen constantly adjusting my stoles, patting the crown of my cap, and generally eschewing the decorum expected of a soon-to-be graduate.

Still, that’s how I wanted it. To even be able to worry about the wind was a blessing in and of itself. Last year’s seniors weren’t able to hold their graduation outside, much less in person. And after spending over a year in isolation, unable to see any of my friends and classmates, a little wind was nothing compared to the feeling of getting to graduate in the same way that countless generations of high school seniors have before me.

Well, almost the same way. Of course there were caveats: due to still-lingering COVID-19 restrictions, my school had to divide up the graduating class into four distinct “cohorts,” or groups. This meant four separate ceremonies, each with only a quarter of the class of 2021. These same restrictions also meant only a fraction of the usual audience, as each graduate was limited to inviting only four total guests. The rest of the graduate’s family – which for me, meant my grandparents – could watch a live-streamed version from their own homes.

Yet even with these caveats, my high school graduation still felt like, well, graduation. By the time I got to my seat, I could feel the bittersweet tension in the air – the feeling that for all of the graduates gathered here today, this was finally the end of our long four years together. And when I was called up to the podium as my graduating cohort’s class speaker, I felt a mix of nervousness and excitement. Nervous with the expected fear of public speaking, of course, but also excited at the prospect of addressing my classmates, of providing what parting words I could before we all scattered to the (rather strong) winds.

Perhaps anticlimactically, the ceremonial turning of the tassel – the final, symbolic transition from high school student to high school graduate – felt like nothing at all. It was only afterwards, in saying goodbye to my classmates and glancing back towards the campus for a final time, that I most keenly felt the change. I would never step foot in this school again, I realized. It was almost like growing up, in that one sudden moment. Like leaving behind my childhood, and becoming an adult at last.