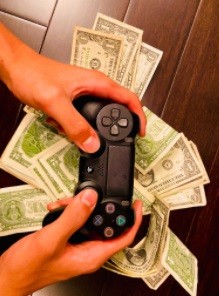 As a video game fan, I, and many other players, have been criticized for our hobby. In today’s society, gaming has been associated with wasting time and some see it as a purposeless toy. But, as I have recently learned through the Axie Infinity game, it turns out video games can actually be a source of significant income.

Axie Infinity, a play-to-win video game based on Ethereum, a cryptocurrency platform, has become a way to earn cash for many people. But before we get to how thousands of people actually earn money by playing, what is Axie Infinity?

Similar to the card game Pokemon, Axie Infinity is a game which involves buying and fighting with magical cute critters, called “Axies.” However, rather than having a tangible ownership of these creatures, they are owned online and they have a substantial value to them.

Before you begin to play, a player must set up their account by purchasing 3 Axies, (which, on average, amounts to about $700) the coin of the Ethereum platform. After purchasing, all you need to do is play. By competing in different game modes and completing tasks, you earn potions called SLP (Small Love Potions) which are each worth 14 cents. You can either sell this SLP or use it to breed and to create a new Axie.

Realizing that you can make money off of games is fascinating, but it just might not be enough. According to Substack, a digital newsletter, the average player can earn around 1500 dollars if selling axies from breeding is taken into account. Frankly, this is not enough to make a comfortable living in the United States.

However, according to Pak Aka, an Axie Infinity scholarship giver, “In Venezuela, the average salary of a worker is about $5 a month. Thanks to Axie, these people are making between $20 and $30 a day. This is not only an improvement in your life, but in the lives of your entire family….As we all know, the world of cryptocurrencies is very volatile, and we do not know what will happen to Axie in the future, but today, I dare to say that this game has totally revolutionized the lives of many people and also the world of gaming.”

Although it is exciting to see a new source of income developing with thousands of supporters and helping people all around the world, we must take into consideration the volatility of cryptocurrency-based video games, as Pak Aka said. Depending on how Ethereum does in the market, you can be making thousands or spending hours playing only to break even, which is something we must all be wary of.