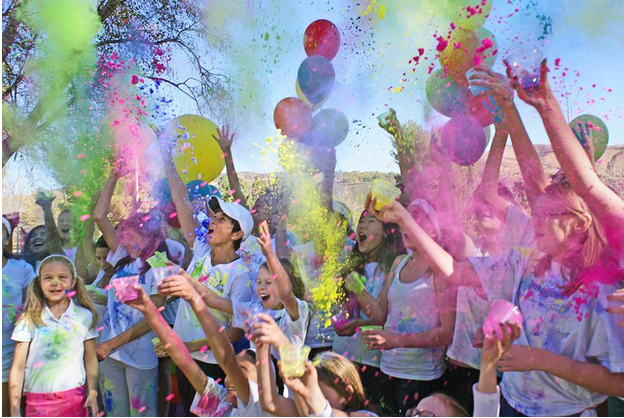 On Saturday, Feb. 15, Santa Clarita held its first annual Color Run. Sponsored by the Santa Clarita Valley Chamber of Commerce, the “Santa Colorita 5K Fun Run” was held at Castaic Lake Recreation Center and was a great success with 1,500 runners.

Participants, both young and old, gathered at 6 am to check in and began the untimed run three hours later in waves. Dressed in white, they were doused in colorful powder at the end of every kilometer by bystanders who stood cheering at the sidelines. At the finish line, the runners took part in the explosive Color Festival in which they were showered with massive amounts of vibrantly-hued corn starch.

“The Color Run, also known as the Happiest 5k on the Planet, is a unique paint race that celebrates healthiness, happiness and individuality,” states The Color Run’s official website. While the official run is held in more than 170 cities, others have began to develop their own color runs–strengthening community bonds and spreading the joy of healthiness and happiness around the world.

These “color runs” are reminiscent of India’s religious Holi festival in which people celebrate the coming of spring and the legend of Holika by dousing each other with colored powder (gulal), symbolic of spring’s many colors. Although there is some controversy to whether these color runs are “white-washing” Holi, they have become a fad in many countries, including the United States.

“The run was a really cool experience. I normally run 5Ks, but people seemed so much happier here,” said Valencia senior and participant Elena Roman to JSR. “My favorite part was throwing the color when the race began.”

Proceeds from the event went to the Santa Clarita Valley Chamber of Commerce and the WiSH Education Foundation.