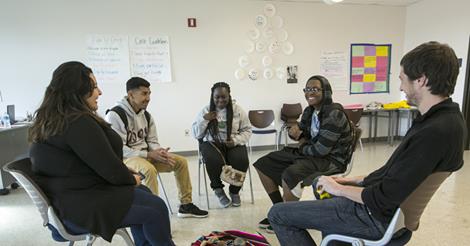 The Restorative Justice Pathway, a new academic honesty policy at Palo Alto’s Palo Alto High School, has been put into action during the 2014-2015 school year.

The school’s student handbook says that “restorative justice is a process intended to achieve two goals: genuine learning that leads to a change in behavior, and restoration for the wrongs done to individuals and the community affected by the individual’s actions.”

In an interview with JSR, dean of students Adam Paulson explained the pathway.

“First you have to admit that you’ve made a mistake,” Paulson said. “Then you put a panel together [with students], which [history and social science teacher] Eric Bloom and I am part of.”

The panel then holds a moderated discussion to discuss the violation and agree upon potential remedies.

Restorative justice potentially benefits violators by giving them opportunities to tell their sides of their stories, and it also helps administrators to understand the cheating culture among students in order to prevent similar behavior.

Paulson stated that since the beginning of this school year, there have been 10 cases of cheating and four of the students have used restorative justice. According to Paulson, some students do not choose to go through the restorative justice process simply because they know they are ready to face the traditional consequence: receiving a zero for the assignment on which they’ve been caught cheating. Paulson said that the ratio between the old policy and the restorative justice pathway will be about equal after some time.

Through the restorative justice pathway, Paulson hopes that talking about issues will restore the trust between students and teachers. In his opinion, the new policy should be educational and informational in nature, rather than punitive.

“It is an organic conversation regarding ways to prevent and change the behavior for next time,” Paulson said.

Additionally, Paulson has hopes of implementing the restorative justice for other student conduct violations. Paulson has confidence in this new system and said that as the administration goes through more cases, the process will become easier.

However, some students do not believe that restorative justice is effective. Sophomore Michelle Leong told JSR that she believes the consequences under the pathway do not seem to do anything that would actually make someone change behavior.

“It seems like the Restorative Justice Pathway is just a fancy way of saying ‘traditional punishment with a lot more work involved,’” Leong said.

Daniel Li is a new JSR student and a sophomore at Palo Alto High.