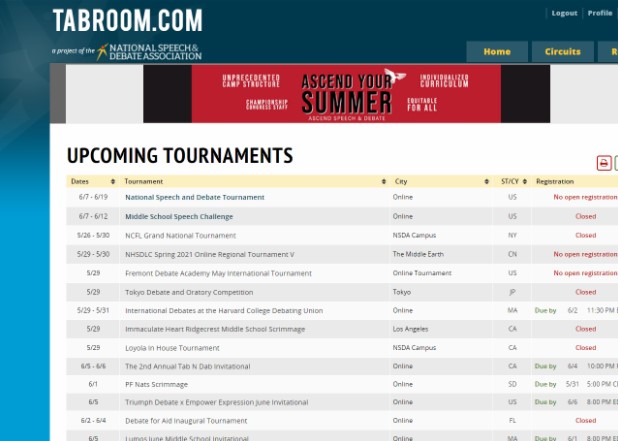 It has been over a year since NSDA, the National Speech and Debate Association, switched the majority of its debate tournaments to be held online through its website. Since the pandemic, Tabroom.com has served as the battleground for passionate middle and high school debaters, by allowing debate tournaments to continue despite restrictions for large gatherings and quarantines.

“I don’t know how we could have continued debate without an online platform like Tabroom,” notes high school student John, a student from Orange County, California. With simple features such as meeting rooms for individual teams and big call rooms for official tournaments, Tabroom provided a platform for debate to continue virtually. Other features also include seeing past tournament records, testing rooms to check video and audio, and email notifications before competitions.

Undoubtedly, there are many positives to virtual debates. Primarily, the most beneficial to having debates virtually is that commuting time was lessened to a simple click and login onto a website. Previously, students would have to drive hours, sometimes traveling on a plane, to arrive at the location of a debate tournament.

Additionally, holding online debate tournaments allowed larger parts of the debating community to connect with each other. Just this spring, many students from the Beverly Hills High School Speech and Debate team were able to compete in a tournament hosted in Tokyo, Japan. Since the Tabroom platform allowed for students to simply join over the internet, students across America were able to easily participate and hear the voices of students living in another country. Continuing to host online debate competitions could allow for more opportunities for similar experiences of connecting students across different locations and gain different perspectives through debate.

Despite its usefulness during the pandemic in allowing debate competitions to continue, Tabroom as an online platform has also presented a significant challenge for many users. Anthony, a high school student from Orange County, California, notes that he was “disconnected several times and was unable to log back into [his] account” due to a major server overload in Tabroom. Many other students reciprocated this concern, recalling the incidents in which technology had proved to be a challenge throughout the pandemic.

Ultimately, the question still stands: Should virtual debate continue? To some, the answer may be a clear yes. But for many who are eager to return to in-person tournaments and experience the thrill of banter, the answer could be different.