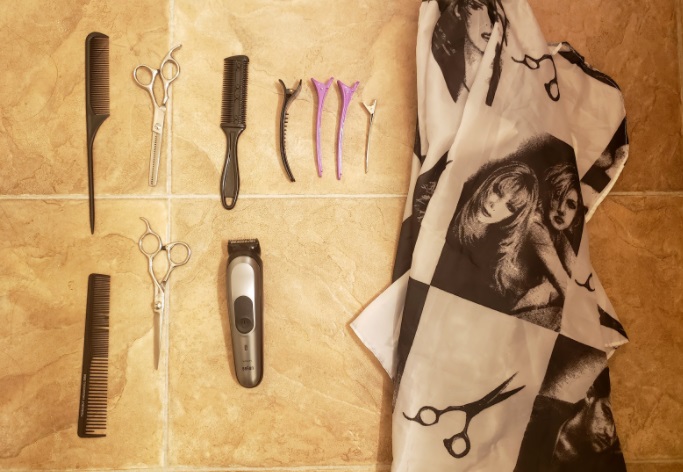 Snip! I watched, wide-eyed as bits of my hair fell in front of me, strand by strand. In my hand, I nervously gripped the cutting shears, feeling the coolness of the metal that dug into my palms. No doubt, I was anxious as I started to cut my own hair for the first time- something I would have never thought of doing if not for this quarantine. However, I soon found out that this experience would wholly change my attitude towards getting a self-haircut.

To start, I began with the basics: a tutorial. With the internet as well developed as it is today, the best resource for anyone to use would be a Youtube video tutorial. Simply type in the name of the haircut you want along with your hair type, and the results that show up should put you at a good starting point. As Sophia Lee, a high school student in Los Angeles, recalls, “Honestly, I thought it would be harder than I’d imagined at first. But a simple Google search proved me wrong.” She notes that she had “taken a risk”, her choice of haircut being the “hershey cut,” a now-trending version of the shaggy cut known for its particularly hard technique. However, Lee recalls that “the tutorial [she] found had done it all.”

Following the guide of the youtube hairstylers, the next step would be to purchase a set of decent hair styling tools. Although there are many professional hair cutting shears on the market, there are also many cheaper alternatives online. I had chosen to go for a particular set of hair cutting equipment found on Amazon for a mere 12 dollars. Lee, on the other hand, had “gone all out” to buy a full set, complete with a nylon wrap and hair thinning scissors for her ambitious haircut. This part should not be hard- just remember to steer away from common household craft scissors and invest in a pair of hair cutting shears for the larger reward.

Finally, it came to the hard part. Sophia Lee admits she spent “what seemed like hours on analyzing the process, and rewatching the tutorial over and over again.” “Before I even started, I had almost memorized the steps and could recount them by heart,” she expressed. Once I had finished my cut, painstakingly reciprocating each cut in the video tutorial, I was able to stand straight and survey myself in the mirror.

Not only is a self-haircut an adventurous task to take on, but it is also safer to stay home during the pandemic and not risk a visit to a crowded hair salon. So if you are tired of your shaggy hair, grab a good pair of hair cutting shears and try it for yourself today!