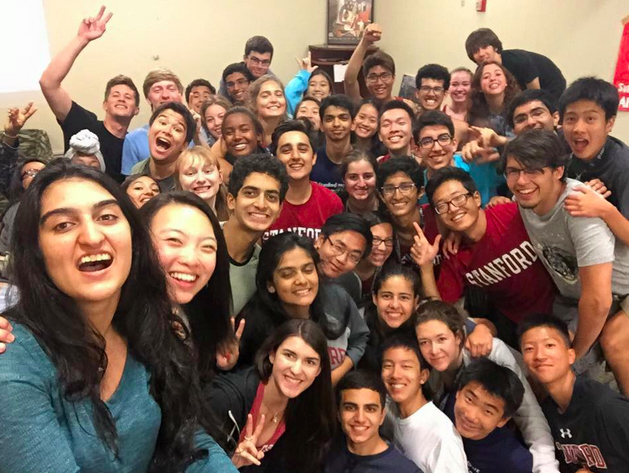 This past July, I was among a group of more than 600 students from all over the world who gathered on the beautiful campus of Stanford University to participate in a residential summer program called Stanford Pre-collegiate Studies (SPCS), formerly known as the Stanford Education Program For Gifted Youth (EPGY).

When I arrived, I was filled with the mixture of anxiety and anticipation that accompanies any experience that involves meeting new people. Everyone I met was here to pursue their respective passions, and despite my usual shyness, I found myself making friends with the most interesting people I had ever met. This was just the beginning of the friendships, debates, classes, and memories that culminated in the most unforgettable four weeks of my life.

I studied Bioscience and Biotechnology, living in a cooperative called ZAP house with 43 other students enrolled in the same program. Having students live with people in the same course allowed students with similar interests to bond and create lasting friendships.

“Ten years from today, I hope to be a venture capitalist,” stated Fabian Fernandez-Han, who chose to take Business. “I chose to study Business because I wanted to experience real debates with people, in real situations,” he told JSR.

Courses were organized according to the respective subjects in two class periods throughout the day. In Bioscience, a morning lecture was often followed by an experiment involving chemicals and other liquids, an engaging debate on the ethics of research, or a study period during which students completed assignments or readings.

Although the name of the program evokes an image of summer school and students’ heads buried in books and work, SPCS broke all negative stereotypes surrounding academic summer programs. Beyond the simple appearance of an educational program to add to a resume, SPCS provided a social platform upon which we all became a “family.”

Lara Maassen, a senior from Munich, Germany, told JSR, “The people – fellow participants, teachers, counselors – were what made the experience unforgettably amazing. People came from diverse backgrounds and all brought their own talents, opinions, and ideas to camp… It was so great spending four weeks with people who quickly became so important to me and enhanced my personality.”

This summer was Maassen’s second year at SPCS. She explained, “I enjoyed the program so much last year that I decided to apply again, and it was definitely worth it.”

According to Fernandez-Han, “My roommate was from Mexico, my two best friends [were] from Singapore and Turkey respectively, [and] their parents ranged from school teachers to hedge fund founders. From our backgrounds it would seem that we would have little in common. Despite our many differences in nationality and ethnicity, cultural roots, and socioeconomic status, we became a tightly-knit family.”

What I personally will take away from this experience is the memory of walking sleepily to class everyday, soaking in the beauty of tree-filled Stanford. I will remember laughter and inside jokes, singing along to the post-curfew strums of a guitar, friendly house rivalries, endless spirals of dining hall ice cream, and a growing human pile on top of a constantly stretching hammock. I will look back on the diverse friends I made and will continue to be amazed by how quickly we bonded, leading to a tearful last day filled with farewells and hugs.