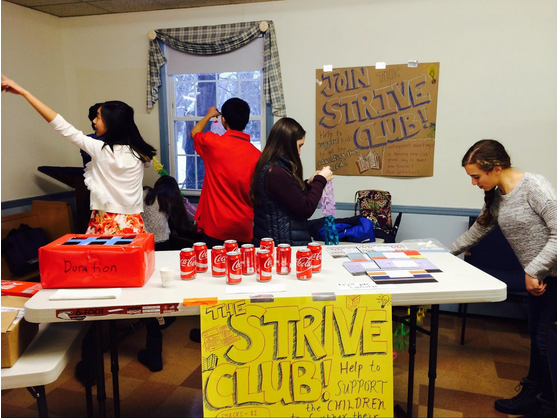 Newly founded this year at New Jersey’s Westfield High School (WHS), the Strive Club works toward the ambitious goal of funding education for students around the world who cannot afford it themselves. Members of the club have been working hard to raise money and awareness for the immense population of students who have extraordinary potential but limited resources to foster their intelligence.

The founder of the Strive Club, WHS sophomore Cindy Qiang, first came up with the idea when she visited China last summer.

She told J Student Reporters, “My original inspiration was my mother, who had grown up in an economically disadvantaged community with few opportunities. She made me realize how much we take our own education for granted, while other students would do anything to attend school but can’t.”

To remedy this growing problem, Qiang decided to recruit her own community to help spread awareness and raise money.

Qiang said, “Nowadays, especially where I live, a lot of people are incredibly lucky and privileged to be exposed to such a high level of education. As a community, I believe that it is our goal to change education for the better.”

The Strive Club selects individual students in countries like Nicaragua, China, and America, and helps fund their educations; the club’s approach shows benefactors exactly to whom and towards what their money is going. Currently, Strive is supporting students at China’s Zhejiang Datong High School.

The Strive Club has so far raised money through small projects like holiday bake sales, fundraisers, and art competitions. It has also participated in the Chinese New Year event in Scotch Plains, New Jersey. Led by Qiang, students helped organize various activities and volunteered at the event, spreading their mission and message to the local Chinese American community. The mayor of Westfield, Andy Skibitsky, and the International Ambassador were also in attendance.

Kim Ou-Yang, a teacher at WHS who acts as a co-advisor to the club, told JSR, “It is always inspiring to see students who are so proactive in working to help raise funds to help students in other parts of the world that they have never met. It is also great to see the students help raise awareness of the importance of education and helping others in need.”

In addition, the members of the club have collaborated to plan an end-of-the-year charity event sponsored by various local stores and restaurants. Club members have been preparing activities and performances, as well as fundraising events.

In order to emphasize the communities the Strive Club supports, the charity event will include musical acts featuring traditional Chinese music and games. The club has also begun selling “pulseras,” colorful bracelets made by Nicaraguan hand weavers, earning over $200 in three days.

Qiang explained, “We ‘strive’ to inspire others to help out those who are less fortunate than we are. I think the best way to do that is to put ourselves out there and inform our community about our goals.”

Though the Strive Club has yet to finish its first year, it is off to a strong start and will continue to promote its message in future years.