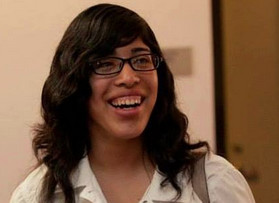 Los Angeles Center for Enriched Studies (LACES), which has several alumni who have succeeded in Hollywood such as Mila Kunis and Leonardo DiCaprio, has yet another student who will soon be joining the movie industry. But rather than starring in a movie as an actress, LACES senior Berenice Estrada will see her life story used as the basis for a science fiction short movie from NBC.

Estrada, who spoke at the 2013 College Board Gaston Caperton Inspiration Award Grant Award Ceremony, has become an inspiration to peers and educators for her personal story of perseverance and determination.

From the age of six, she learned to thrive under difficult conditions. When her parents divorced due to domestic violence, she took up the responsibility of caring for her family as it endured financial difficulty and a period of homelessness. Yet, she succeeded and now keeps a busy schedule balancing school and family.

Estrada captains the varsity cross country teen, ranking academically in the top ten of her graduating class, and receiving various academic awards. She also holds a part-time job at the Los Angeles Public Library, where she founded and directs a tutoring program to help other Latino students achieve their full potential.

Last summer, while she was interning at the California Institute of Technology (Caltech), NBC asked her to participate in a character study for the main character of their upcoming movie about a curious, outgoing teenager who solves science fiction mysteries. Estrada was chosen to aid the main actress by talking about her backstory, personality, and her problem-solving abilities.

“They’ve talked to my mom and me about how she raised me, and how I had become who I am today. They’re basically trying to recopy what I’ve become,” said Estrada in an interview with J Student Reporters.

The NBC has been in contact with Estrada ever since her internship. They asked for photos of her neighborhood and conducted numerous interviews and photo shoots.

“They are trying to show how someone from my kind of background can grow up to be curious and scientific and solve mysteries,” Estrada continued. “It is really exciting because what the NBC partnership is trying to show is our backstories. I’m not the only one who’s had these struggles. What is important is that we persevere no matter what.”

With the film’s debut planned for this year, Estrada is optimistic. She hopes that her backstory will influence others to work hard and not lose hope.