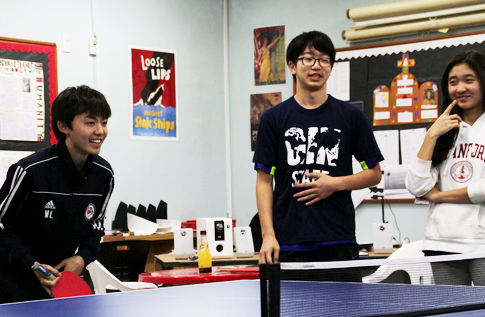 Seoul International School (SIS)’s Global Issue Network (GIN) club hosted a 30 Hour Famine from 6 am on April 17 until 12 pm the next day.

The 30 Hour Famine is a yearly event created by World Vision, an evangelical Christian humanitarian organization, in which participants abstain from food to inspire sponsors to donate money. That money then goes towards feeding starving children from countries such as Kenya, the Democratic Republic of the Congo, and North Korea. According to GIN members, raising even $35 can feed a child for a month.

This year, GIN added a new twist by allowing participants to enjoy a lock-in at school.

“We decided a lock-in would give the people a great incentive to join the Famine,” said Ga Ram Lee, an organizer of the event. “After all, [fasting] is not the most ideal thing to do so hanging out with your friends all night would be something to actually look forward to. This is [the first] lock-in in three years so we wanted to make it fun but also educational.”

Participants had a variety of activities to enjoy. After a reception and a showing of a TED Talk video by Simon Moss entitled “Africa is Poor and 5 Other Myths,” students were given free time to immerse themselves in activities.

“The activities open to the students were quite great for an event that was organized and run solely by one club at SIS,” said attendee Kevin Shim to JSR.

Shim continued, “There was an activity fitting for just about anyone: ping-pong for sport enthusiasts, a myriad of board games for the old-fashion sleepover types, back-to-back movies in the auditorium for the movie-lovers, and even a karaoke machine!”

“My single favorite activity is hard to choose,” Shim said. “The overall atmosphere and the blanketing feeling of camaraderie was what I enjoyed the most.”

Another unique adaptation to GIN’s lock-in was the option of purchasing food for those who felt uneasy about not eating for 30 hours. However, this option was far from lenient as food prices started at unreasonable levels to discourage participants from giving up so easily.

“A setback,” said Eugenie Lee, a GIN member who was in charge of the event, “was that not a lot of people showed up. I admit that I broke down at first but I got myself back together.”

“We decided to round up as many of the soccer players as possible because there was a home game going on against Asia Pacific International School (APIS),” Lee told JSR. “So, we started to advertise to the soccer people and decided to have the 20 people who actually came on time go watch the rest of the soccer game.”

Lee concluded, “We had to push back the reception and get rid of a treasure hunt but… got through it with effective communication and teamwork to set up an efficient and well-working plan.”