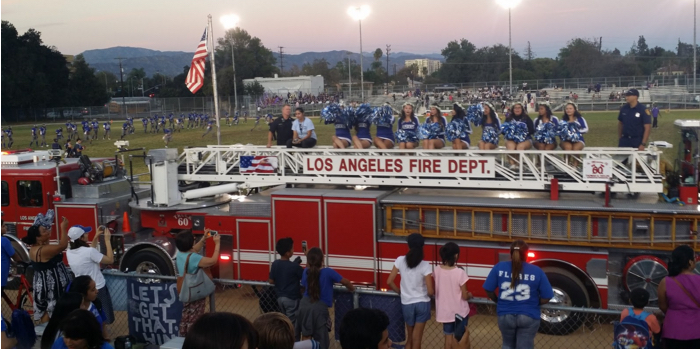 From October 5 to 9, North Hollywood High School (NHHS) was busy preparing for a pep rally, the homecoming game, and a special dance.

Homecoming, a tradition at high schools and colleges in the US, is typically a sporting event to which alumni are invited. At many schools, the event is marked by a week of celebration.

On the first day of NHHS’ 2015 Homecoming Week, students wore Hawaiian clothes for their Hawaiian Day. Following Hawaiian Day, many students participated in Twin Day on Tuesday, Workout Day on Wednesday, Tie Dye Shirt Day on Thursday, and Blue Out on Friday to represent the school color of NHHS. It was a great opportunity for students to increase their school spirit.

Ms. Schultz, the Associated Student Body class teacher, told JSR about the importance of Spirit Week and said, “It helps to bring a sense of belonging and community to the entire campus.”

NHHS held a pep rally at noon on the last day of the Homecoming Week, Friday, October 9. Bleachers were filled with both students and enthusiasm, and the whole school became heated with students’ cheers for sports teams, academic teams, teachers, and the students themselves. The pep rally began with a marching band performance.

Restee Mopia, a senior at NHHS, told JSR, “A pep rally is a great event to bring up students’ spirit. I always get pumped up. One of the main reasons I like pep rallies is because of each grades’ positivities. I also appreciate our school’s sports and academics teams. I cheer hard when the MCs do ‘teams call out.’”

That night, the homecoming football game was held against Cesar E. Chavez High School. The whole school was filled with excitement and nervousness, and blue was seemingly everywhere — many students painted blue paws on their faces, arms, and legs, and some painted their entire faces or upper bodies in the color. NHHS won the game by a score of 48-38.

According to Mopia, “Whenever I come to my school’s homecoming game, I always feel surprised by the enthusiasm of the crowds. The game is always packed with students, alumni, and the parents. It’s good to see all of them supporting our school.”

The Homecoming Court, during which the candidates for Homecoming King and Queen are announced, was one of the main highlights during the game. NHHS crowned its royalty on the day of the Homecoming Dance, a week after the game on Friday, October 16.

Jareny Cebreros, the Homecoming Court chair, told JSR, “This year’s Homecoming Court was prepared slightly different from last year. I decided to make some changes that made the process a bit simpler and that would make students to be involved better and with more enjoyment.”

Cebreros continued, “The whole process was very well organized and there was never anything being done at the last minute. The court was finished successfully. Thanks to all the people who helped me I was able to get everything done, especially Hana, Seyda, and Mr. (James) Mcvay.”

Mopia added, “Lots of my friends from other schools present the king and queen with the other crown winners. I think it adds more intensity and curiosity when we hold on to king and queen announcement until a week later. This way, the [excitement] doesn’t [go away] too quickly.”

“This year’s Homecoming Dance felt more important and unique than ever because it was my last high school homecoming,” Mopia concluded.” The vibrant theme of ‘the Arabian Night’ was well presented with great music, centerpieces, lights, and decorations. Last year’s theme was ‘Old Hollywood,’ and it was fun to see the two different atmospheres at the party place. I am thankful to North Hollywood High School for providing us with great memories.”